A cheering crowd. Bundles of flowers. Clapping emotes as far as the eye could see in every direction.

Aoko grinned, waving at the crowd. Hana laughed beside her and then waved as well. After that, Alfi got out of the chair and hugged the two, smiling.

John watched all of that and then set his violin aside. He stretched and then pulled out his phone to check the time. After that, he nodded and said, "We've gone a bit over now..." He turned to face the crowd. "We don't want to keep you all waiting too long. It's a busy time... so how about we let the girls take a break to rest up before the finale."

"Huh?" Hana walked over to John and said, "Are we really going to end it soon, Mister John?"

John glanced over to the floating chatbox next to him and then rubbed the back of his head. "Well... I'm sure that all of us would like for this concert to last a bit longer, right?"

A roar erupted from the crowd in response, along with a blur of light from their glowsticks.

John laughed and said, "Yeah. Thought so. Unfortunately... it looks like UTube is breaking." He glanced at the floating chatbox next to him and said, "The chat is dead and I've got a feeling that we're going to start buffering soon."

Off on the side, Titor stood up from his drumset and tapped in the air. When he did, a floating window appeared in front of him. He stared at it for a bit and then sighed. "To think that the technology of this era goes only this far... If it were my own brilliance at the helm of development, we would already be on-"

"Oi!" John cut Titor off and said, "Different worldline or not, that's still tech the world isn't prepped for. Shush!"

Aoko adjusted her mic stand and then looked at John and Titor. Frowning, she said, "...You know, talking like that isn't helping the case of you guys NOT being real time travelers..."

Titor laughed and adjusted his fedora. "We are all time travelers, Miss Dragon Queen. Unfortunately for most, they can only travel in one direction."

John let out an exasperated sigh and then looked towards Alfi. "Could you take the girls out and rest up, Alfi?" He pointed to Titor and said, "This crazy guy and I will hold the line for a while so that you girls can relax a bit. Then we'll finish things up here and send everyone off."

Aoko adjusted her ribbon and said, "With that finale and how cute Alfi's been, we might actually do that..."

Alfi tilted her head. "Jinx what? We want to send people off with a big finale, don't we?"

Hana and Aoko looked at each other and then sighed.

Aoko shook her head and said, "I keep forgetting that you have a weird sense of normal..."

Aoko wrapped her arm around Hana's shoulders and dragged her over. "I don't want to hear that from you, Sis. You're a weirdo too with that collection of-"

Aoko laughed and walked off to the back. "Come on, Alfi. Let's grab some drinks real quick and let the two clowns fool around for a while."

Titor gasped and placed his hand on his chest. "I take umbrage to that, Dragon Queen! I am a mad scientist, not a clown!"

Alfi giggled and followed after Aoko. Letting out a warm smile, Alfi nodded and said, "Okay, Aoko-chan. But this time, let me use the vending machine. It'd be bad if you got soaked again, right?"

"That was ONE time!"

The girls vanished through the invisible veil, leaving just Titor and John on the stage.

John walked over to the mic stands and rubbed the back of his neck. "I don't know if I like being lumped in with Titor as a clown... but considering how we're related..."

Titor walked over to John as well and laughed. "Are you having regrets, my other half?"

"The only regret I have is not dragging Amadeus to witness your *marvelous* intellect first hand."

John adjusted the mic stand before pulling off the microphone. Tapping it a few times to check the volume, he turned towards Titor and said, "How far have you two gotten anyway? Since she's like Yue, the nights must be pretty crazy, right?"

Titor cleared his throat and said, "I would never talk ill of a lady." He paused and said, "And what of you, oh Golden Immortal? Has your Jade Princess finally become meek?"

John shrugged. "Yue's always been cute around me. Which is odd considering how rough Amadeus is with you." He paused and then narrowed his eyes. "Unless you're an M?"

"...I hate you. You know that?" John frowned and said, "Some days, I just wanna walk over and knock that smug grin off your face."

"And some days I want to kick you through a door with how loveydovey you are with your adorable wife, so I think it's fair, is it not?"

John rolled his eyes. "Anyway..." He looked out at the crowd. "Enough of the two-bit comedy."

Titor grabbed the other microphone and nodded. "Yes. I suppose we should not keep our fellow operators waiting... Though is Miss Jenny not going to make her reappearance?"

Silence filled the air. A sharp and dense silence that was almost tangible.

John laughed and said, "While I think she'd enjoy it, I've got a feeling that I'll be hounded down to the ends of the Earth if she reappeared right now." He looked out at the crowd and said, "And I don't think these guys would take too kindly to that."

Boos filled the air. But mixed in with those were laughter, cheers, and vicious curses.

In short, a chaotic response.

Titor chuckled. "Yes. I suppose that is fair. Though if that is the case... No, best not to spoil the surprise."

"Hm?" John glanced at Titor and then narrowed his eyes. "You're planning something."

Titor waved his hand. "Don't worry about it. Now... shall I decide upon our virtuoso performance, or-"

"And have you pick something dumb and inappropriate like Skynut or a meme song? No thanks."

"Why the little faith, my other half?"

"The little faith is from you turning me into meme of the century after Yue's concert."

Titor pulled off his fedora and tossed it to the side, letting it dissolve into lights. After that, he held up his mic and said, "Very well. Then... I will leave it to you. This time."

"...Alright. I'll remind Yue to have a chat with Amadeus later then about some 'fun' tips."

Titor's eyes widened. "W-Wait a minute. There's no need to go that far!"

"Uh-huh. Anyway..." John turned out at the crowd and hummed. "It'd be great to do something fun and upbeat, but the finale's going to be high energy. And I suppose it's been a while since I sang something seriously, so..." John snapped his fingers.

The stage rippled before turning into a city plaza with a gray sky and light snow falling down. But it wasn't just any city plaza.

Tall buildings and lights all around, a glittering Christmas tree standing tall in the middle of the plaza behind John and Titor...

"Hm?" Titor frowned and looked around. And then his eyes widened. "H-Hey now." He turned towards John and said, "You didn't say anything about this duet being a romantic one."

John smirked and said, "Well, since my 'other half' is having some trouble with his love life, I figured I'd give him a chance to show off a bit. No big deal, right?"

"Too late." John smiled and said, "Here's to you, Wifey. And to a certain beauty beloved by the gods as well."

"Argh." Titor ran his hand through his hair and then held up his mic. "I'm going to get you back for this."

"You'll thank me later when it's Christmas. Anyway... here we go." John closed his eyes and then started to sing.

Here's a picture of John as the proper ladykiller he is. Commissioned by Dovinder on Sketchmob. 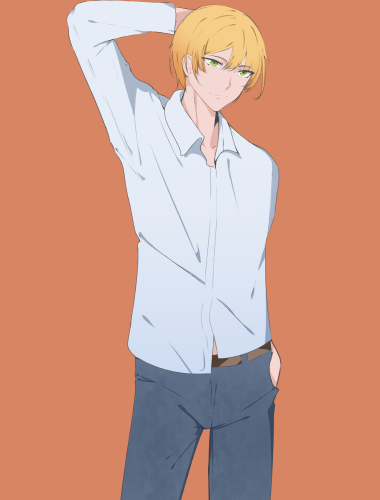