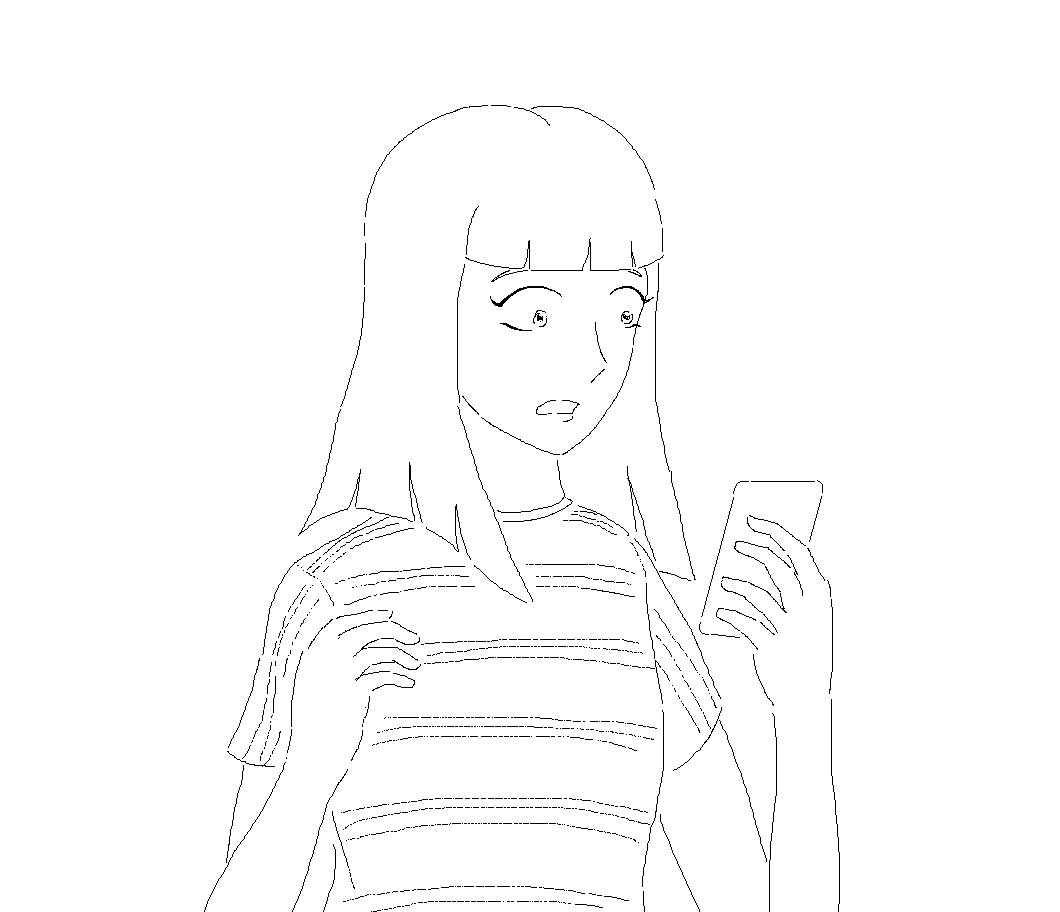 “What the...?” A shiver had overcome Lucy as she surveyed her apartment frantically. “I'm alone right now. Nobody is here. But... this isn't real, right? I just wanted to talk to my old friends. Why is he here? I thought he deleted his account.” Frightened, emotionally vulnerable, and completely paranoid, Lucy could not help looking over her shoulder. But as time passed, seeing the green dot next to Johan's name, a calm eventually sets in. “Why am I afraid? Me and Johan, we talked things out. We left on good terms. He's not a bad guy. So why am afraid of seeing him online? Because he said he didn't want to see me anymore. He said it wasn't right. I still don't get it. Was I not supposed to return to Gmail? I mean, it's my email address.”

The chaos inside her head subsided, rationalization clearing all doubts, her body relaxed. “But he's here now. Maybe he hasn't noticed me? He's not chatting with me. Maybe I should leave him alone.” Another moment of silence as she leaned against the window and looked at her reflection. “I've been wondering how you've been doing. Just curious, you know. It's been a while since we last talked. I... well... I know what you said and I want to respect your decision. But, I must admit... that... I kind of... missed you.”

Looking at her phone, the green dot remaining in place, having no plans of leaving anytime soon, “Would it be so bad if I just simply said hello? That wouldn't be so bad, right?” She placed both her hands behind her phone as her thumbs typed 'Hi'. Before she could hit send, a message appeared below, 'Johan is now typing.' Her initial surprise nearly made her drop her phone as she fumbled to keep it from dropping.

Once she had it grasped, “No way. Is he really typing?” Calming herself when the message disappeared, “Maybe he's thinking the same thing. Maybe he does want to chat again. But why did he stop? Should I keep going?” She twiddled her thumbs and after taking a deep breath, she tapped send.

As soon as her message was sent, 'Hello' was present underneath it. She felt her heart skip a beat seeing Johan's message right underneath hers.

“What just happened? That's so weird, but... Oh gosh, am I chatting with him again? Does this count? No, I'm just saying hello, right?” That feeling of doubt and anxiety she knew all too well made its appearance. It wanted her to stop and turn off her phone, maybe even delete her account. But the thought of returning to her previous gloomy and desperate state was not too far behind. It was a stagnant emotion that overstayed its welcome, and she wanted to get rid of it.

She was so surprise at the coincidence that she could not help but smile. “No way,” she commented before typing 'I'm doing fine' and hitting send. His 'I'm doing fine' followed almost immediately.

The situation was so comical that she could not help but start laughing loudly. She shared her joy with Johan by sending him 'Lol' followed by 'Is this really happening?'

Johan broke the streak of coincidences by replying, ''So it really is you?'

'Yeah, it is,' she responded back controlling her laughter. 'You're not a psychic as well, are you?'

Felling a bit awkward, but nonetheless continuing to humor him, 'It's a long story.'

'No, I'm not a psychic. It's a weird coincidence. I actually thought I was chatting with a bot for a minute.'

'Oh, that would make sense. I didn't consider that.'

'I don't know. I'm not convinced. Maybe you really are a bot.'

'Really? Then prove it.'

Lucy was now in a fit of laughter as she held on to her stomach and laid on the bed.

The laughter, the joy, the warm feeling she had not felt before, it had all returned to her that night. It was such a splendid feeling that she felt renewed once again. Recharged, full of life, as if she shed her old body and entered into a new one. A feeling that would repeat again and again after every session with Johan.

Days would pass as the chats from before were no longer a mere footnote in their lives. It had returned with even more vigor. The desperation she was going through was now replace with that of splendor. It was a joy she never wanted to end.

Her joy was as great as the guilt she felt.

Sitting in class, she struggled to hear the teacher as her thoughts were preoccupied with the dilemma imposed upon her. 'I don't think there's anything wrong chatting with him, yet I always feel so bad when I do so. I know Johan said I shouldn't talk to him anymore, but he sounded so happy last night. Why do I get this guilty feeling when there's nothing wrong? It's not like I'm chatting with a stranger. We're friends, right? We are friends, aren't we?'

Classes ended and Lucy spared no time in pulling out her phone, eager to check on Google Chat, and end up disappointed finding him offline.

"He must still be in class," she told herself.

"Whose still in class?"

"Johan. Maybe he doesn't have a chance to chat with me during classes."

"You really want to talk to him, don't you?"

"Yeah, but I really feel guilty about this."

“Because he says...” Lucy paused as her attention focused on reality. With a jolt, she said loudly "Jenny!" before taking a step back.

"Not much. Only that you can't wait to talk to your boyfriend again."

Lucy quickly covers Jenny's mouth and dragged her to a more secluded area. "Don't say that out loud," she said as she let go of Jenny.

"So it's true, you really do love that college boy."

"You're assuming things. I never said anything about liking anyone."

"Lucy, you're so naive. You practically confessed when we were hanging out. You might as well-"

"I might as well do what? Why can't you mind your own business? Do you only care about gossip?"

“You know I care about you. I'm just trying to help you out.”

“But you're so nosy. I just want to be left alone.”

“But you look so miserable alone. Come on, tell me, I'm your friend.”

“I never said you were my friend.”

“Again with being so honest. Fine, then I'll just find out myself.”

Jenny quickly snatched the phone from Lucy's hand. “Hey, give that back!” Lucy yelled.

“Let's find out what you've been saying then.”

Lucy reclaimed her phone but Jenny had a strong grip on it. The struggle to retrieve it was so intense that Lucy had to pull it with all her might. It was enough to loosen Jenny's grip and fly off her hands. Lucy could only watch as the phone fell face down onto the hard pavement. Frantically picking it up, two large cracks were present on the screen. She tried unlocking it but no matter how many times she pressed the power button, the phone would not turn on.

"What did you do!?" Lucy shouted. "You broke my phone! He could be online any minute now!"

"Why did you take my phone? I told you I didn't want you to look! Why are you so stupid!?" Having enough cognitive sense, she stopped before the tears flowed from her eyes. With nothing else that could be done, she ran off.

Reaching her apartment, struggling to keep her emotions in check, Lucy ransacks her own bag. “Where are those stupid keys?” Pulling both zippers and opening the bag wide, she placed a hand on the bag's base but before she could flip it, the front door opens.

"Oh, Hello Lucy," Carry said surprised. The visage of Lucy looking despondent was visible enough that not even her mother could ignore it. Looking at her sad daughter before her, she cleared her throat, "Well, I'm going out right now. Do be a good girl bye." She brushed against her daughter and took her leave, but not before Lucy got in front of her.

"I figured we can go out and get a new phone. Together. Just the two of us."

"Your father has more money than me. Ask him."

"Lucy, I don't know what you mean. I spent plenty of time with you before."

"I don't remember the last time we did anything."

"I'm busy these days, girl. You'll have to wait till I get some free time."

"I was working the night shift."

"I called your job and they said you left early."

"I called your phone too and you didn't answer."

"Then what were you doing?"

"Hey now, that's adult stuff. You're too young to know."

"I'm not a little kid, Mom. I know what you are doing late at night."

"Lucy, what's with this attitude you are giving me? I'm your mother, you have to respect me. It's the law."

"Mom, please, just... let's just do something together. At least one night. One night won't kill you."

"Lucy, we'll talk about this later. I got to go now, okay?" Pushing aside her daughter, she continued on towards the elevator.

No longer capable of holding back her tears, Lucy ran back home, shut the door, and dropped her bag onto the ground before landing face down on the couch, her tears staining the pillows as she buried her face. In her anguish, she managed to look around her apartment and noticed the broken phone on the ground. With a great deal of sadness equaled to the amount of anger within her, she bolted into her room, got on her computer, and as soon as it booted up, she opened Google Chat from her desktop.

Johan was still offline but it did not matter to her as she started typing.

Johan, I was thinking, maybe we should meet up again.

Dream of the Eternal Lovers
Oldest | Recent
Search
Your changes has been saved.
Action Required