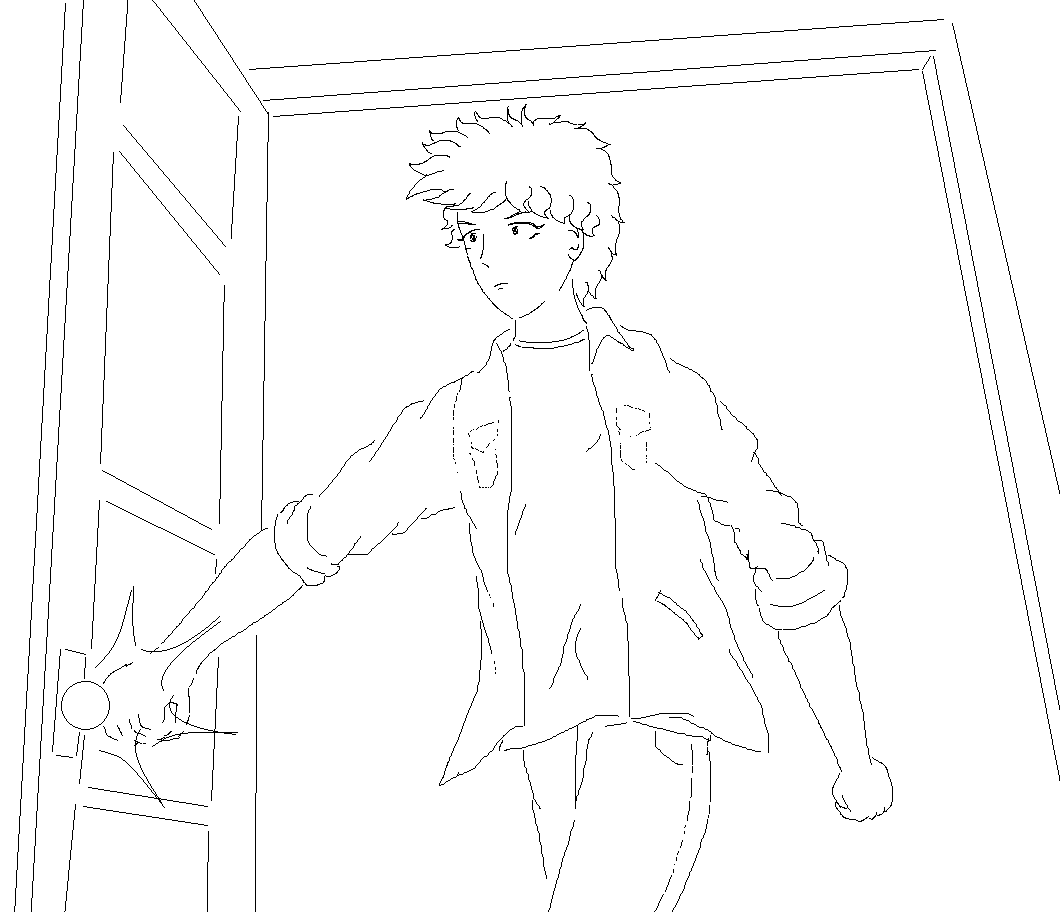 The front door opened and in comes Johan approaching Wendy with a determined look on his face. They were expecting a great proclamation of some kind only for him to turn around and head to his room.

Before they could figure out what just transpired, Johan exited the room and with the same determination, approached them again. "Wendy..." he said.

Within his room, "I have to say something. I can't just be silent about this."

"Something on your mind?"

"Of course." He replied while scratching his ear.

Johan put his hand down. "Alright, fine. Sit on the couch, I'll join you."

Both return to the living with Wendy taking their seat on the couch. "Tell me, what is going on?"

"Fine,” he said as he sat next to them. “I'll just get down to it. I got a message from that girl I hanged out with on Saturday."

"The thing is, I have to tell her I can't see her anymore. I thought I did that last Saturday, but I can't remember if I did or not. That was supposed to be my goodbye but apparently, she's looking forward to another day out."

"I see. And who is this girl exactly?"

"That's what I need to talk to you about as well."

"So what exactly do you want to talk to me about then?"

"I don't know what to do about this girl because I'm dying here. On one hand, I really like her and I want to be with her. I really don't see what the big deal is. I'm not doing anything inappropriate. But on the other hand, people are going to get the wrong idea, and I don't think this is allowed anyway." He got up to his feet. "This is driving me crazy. I have no idea what to answer, because if I reject her, I fear I'll throw away the last thing I have left. On the other hand, the longer I continue this, the more trouble I'm going to end up getting into. I feel that I'm surrounded by enemies all around me and that they'll destroy me if I don't give in to their whims. What am I supposed to do?"

Wendy got up to join him, "Johan, I don't know what to say. I have no idea what happened to you as of late to make you act this way, but if there's anything you want to say, you might as well just say it, so say it."

"I already said what I had to say."

"That's the thing, you haven't. You haven't said anything. I don't know what you are talking about. Is this some weird coping mechanism for whatever it is you are going through?"

"No. I'm having trouble and I wanted to talk to someone about it."

"And I have no idea what you're saying. I can't interpret what you could possibly be trying to tell me."

Johan released a frustrating groan, "Can't you just answer what I asked?"

"Whatever symbolism this is, I don't get it. I mean, is this person even real?"

"Be more elaborate. What girl?"

"What are her hobbies? Is she a freshman or a senior? Is she even going to college? Did she graduate? Is she working? How did you meet her?"

"You can't answer them, huh? Then I don't know how to help you."

Johan thought for a moment before replying, "I guess... you really can't."

"Ever since that day in high school, everything changed. I lost a lot of friends, and my parents won't talk to me. You've been there for me, being supportive of me, but I have noticed that you have been kind of distant too. Are you just saying you support me just to be nice?"

Wendy released their hand and turned around, "Yeah, sure."

"It's as clear as day, it's not a secret. I'd rather you'd be honest. You know, I don't care what people say about me. I don't care that some people make fun of me and call me names, say derogatory slurs. You know the kind, right? But the irony is that I wish you were honest with me. Your fake support is not what I want, I want the truth, alright? I promise, I won't get mad, I won't get angry. If you don't like me because of this, that's okay. It's okay, okay?"

"Wendy, stop talking crazy. I'm not going to say anything terrible about you."

"But your support doesn't sound convincing either. It's like you're forcing yourself."

"Not so much your words, but more your body language. I can sense that... somethings making you uncomfortable."

The disapproval was vivid in their voice, a disturbing sensation that was brewing inside of them being let out. It was as if Johan was watching his former friend continuing to disappear before his eyes. "Then tell me, do you believe you are different than other people?" he asked.

"How does that make you feel?"

Wendy thought for a moment before responding, "I sometimes get ridiculed, and I sometimes get support. Both seem to be equally said to me. I have learned to tolerate the negativity and focus on the positive. That's how I deal with it."

"But why? Why do you put up with the negativity?"

"Because I'm a human being, you know? You shouldn't be judged based on stereotypes and presumptions. I breathe and talk and laugh like anybody else. So what if I'm different than everyone else. I should be treated the same as everyone else because I am like everyone else. There's no point in me fighting it. Some people are just fools, so let them be fools."

“But you just said you felt different.”

“I am different, but that doesn't mean I should be treated as such.”

“How can come to such simple conclusions? The world isn't as simple as that.”

“That's the problem with everyone. Everyone wants to complicate everything. Everything is about logistics.”

“What do you mean logistics?”

Looking at Wendy with a piercing look, Johan asked, "And what about you?"

"Do you judge people before you get to know them?"

"Do you judge people who you've known for a long time?"

"I see. So you never once assumed anything about anybody?"

"I don't think so. Maybe once or twice I've thought about somebody in a certain way, but I'd like to think I see the best in people."

There was smugness emanating from Wendy while a look of dissatisfaction was showcased on Johan's face as he replied, "Real funny, Edwin."

"What? What are you on about?"

"What are you doing? You're confusing me."

"And you want to be treated like everyone else."

"Oh, but of course, of course. You would never judge a person behind their back. Oh no."

"Johan, what are you trying to tell me?"

Johan walked past Wendy and headed to his room, but before he entered, "Edwin, I think it's time we grew up. This isn't high school anymore. We're in the real world now, and the real world is nasty and disgusting!"

He shut the door and locked it before he lied on his bed. 'What do you know? You don't know anything. You're too comfortable that every single little thing hurts your stupid little feelings. Try walking in my shoes. I can't believe I was even considering telling you.' After a few moments of stewing, he rested his arm on his eyes. 'No. I'm just taking out my frustrations on him. My friend. My former best friend. I used to talk to you about anything. Well, almost anything. Now, I have nothing. No friends, no family, no girlfriend... Girlfriend?'

A small shock to his body caused him to sit straight up. A strange sensation that was neither malevolent nor comforting was upon him. 'I really am alone, aren't I? But is that a bad thing? Maybe my problem is that I'm concerning myself with those around me. Margaret is right, worrying about what everyone else thinks of me is the cause of my misery. I have to be nice to people I don't like, dressing up and grooming myself to attract people I could care less about. Why do I even wear these clothes?'

He got up to his feet and looked at himself in the mirror. 'I buy them for myself because I like these clothes. In fact, everything I do, I don't do for anyone, at least not anymore, especially since they all left me. That has to be my problem. I'm trying to please a world that despises me. A fool's errand. If they hate me so much, why am I even trying? Saying they care about me only to ditch me in the end. Telling me to my face they won't judge me, and then doing that very thing behind my back. I'm sick of of all this!' He headed toward the window to stare at the world. 'I think I will quit college and live somewhere remote where I don't have to deal with anyone. I'll live all by myself and then I won't have to deal with this pain. I can finally be myself and not care what anybody thinks. My only companions will be my novels. I can be whoever I want to be in my own world. I don't need the one I was handed.'

As a great elated feeling enveloped within him, he felt a nudge on his shoulder.

He turned around, “Edwin, please, will you-” but nobody was present. Instead, his eyes immediately dart toward his phone sitting on the bed.

'I'm certain I didn't make it clear then, but now that I have this ambition, it's finally time to end this. I'll accept her next invitation and then tell her that it's over, that we can't hang out anymore. Sorry, Lucy but I got to do this. It's best for both of us. I'm still a gentleman so I'll give you one last outing, but you won't see me anymore after this. This is the last time we meet."

With a sense of determination, she opened Gmail and was surprised to find her last message was responded to. A bit of hesitation was going through her but at the same time anticipation. "At least he didn't block me," she said before clicking the message.

'How about we hang out again this Saturday?

Dream of the Eternal Lovers
Oldest | Recent
Search
Your changes has been saved.
Action Required