1.1k 9 17
Advertisements
X
Reading Options
Font Size
A- 15px A+
Width
Reset
X
Table of Contents
Loading... please wait.
PreviousNext
Announcement
Hi everyone! This series is being written unedited and unplanned. Please consider this to be in the style of 4-koma manga, where each chapter is a short disjointed scene. Ki-chan's story is something that has been coming to me in dreams for many years, so I hope I'm able to convey the fragments properly! 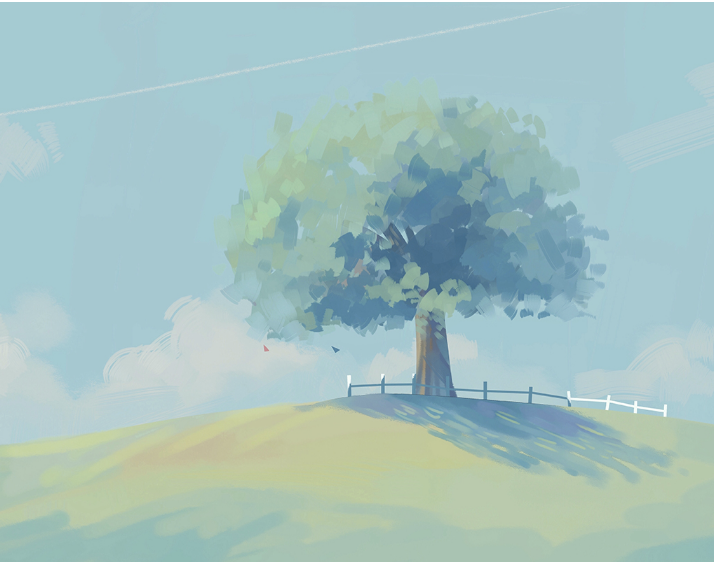 Kiu Lee stretched her arms and rubbed her eyes. She pulled herself forward on her elevated perch.

The thin pages of the hardcover book in her lap fluttered to a close.

That had been a good nap.

Mom would probably scold her if she knew she had fallen asleep in virtual reality again. The doctors always warned that virtual sleep was illusory even if it felt refreshing (something about it lacking REM stages), so it was best to avoid taking a snooze while still online. However, who didn’t indulge in such a thing every now and then?

Virtual reality was as cozy as hell.

One could escape to any environment imaginable for something as mundane as reading a book. It was possible to shape the environment according to one's desires, and even the weather and time of day could be controlled on this freeform server. Naturally, who couldn't resist but doze off every now and then?

Most high schoolers valued their friends, and in the 25th Century, most teenagers found their closest friendships online. Some youth even attended virtual high school. After all, what was the point of paying utilities and janitorial staff to maintain a real campus building when it was just as good on virtual reality?

For Kiu Lee, her social network was digital as well.

Kiu placed the book she had been reading in the black sling bag that was slung over her shoulder. This doubled as the portal into her digital "inventory", so it was a semi-permanent accessory on her avatar.

She promptly swung down the crooked mulberry tree that had been her roosting spot, and she was especially careful to watch where her legs landed.

The soles of her bare feet touched down on the earth in almost perfect cat-like silence.

At the base, there was a green-haired boy snoozing with his neck craned in an awkward position. He had fallen asleep leaning against the trunk of the mulberry tree, with a stack of papers still strewn across his lap. There were also textbooks and various other stationary scattered nearby on the grass. The sheets were printed with various calculus formulas and differential equations, and Kiu could tell just from a glance that the green-haired boy had not finished the entirety of all the questions.

This was the problem set that he had due tomorrow.

Kiu looked back at the boy and there was a thin sliver of drool rolling from his mouth.

She paused for a second, and then looked at the time.

Kiu sighed for a moment, and then tapped the boy's head with the flat of her fist.

However there was no response from the boy. Not even his mint-green locks swayed the slightest.

She shoved him a little harder, still to no effect, until finally she practically kicked him over.

"No, now." Kiu repeated. "I'm closing this private room when I log off. Also you never finished your calc P-set."

"Huuuh whaaat? When did I fall asleep? Wait, lemme get up." The teenager named Ves struggled to his feet. "Don't log off just yet. Need to grab my stuff before you kill the server... would suck if my assignment got obliterated... QAQ"

Ves, incidentally, wasn't his real name. It was merely short for his online username: Vesrian731.

The two of them had never met in real life.

Incidentally, of course they didn't even go to the same schools.

A few years ago they had just happened to meet due to a mutual acquaintance, and for some peculiar reason the guy ended up sticking around in her "friend" group for inexplicable reasons.

Kiu's parents were quite wealthy, so she had been able to afford a pretty nice private server package on MagnoliaOnline (MO) with the savings from her allowance. It was one of the top tiers options with the highest number of environment customization features available, and initially Kiu had been infatuated with the idea of creating the ultimate NEET wonderland for bookworms.

Over the years, she had many "friends" come and go on her private server, but Kiu wasn't sure if she could call many of them friends.

Although privately, Kiu thought that maybe "barnacles" would be a better descriptive term.

Kiu wasn't the type who enjoyed human company in particular. She much preferred her books.

She didn't mind having public invitations for guests on her server as long as they were quiet and well-behaved. Besides, she had spent quite a lot of money on an entire private server, so she always thought it would a bit of a waste if she kept it all to herself. Rationally speaking, an entire World was much too big for a single hikikomori1Hikikomori: A hikikomori is someone who rarely, if ever, leaves their home or room. They withdraw from society and have few friends. to use as a reading lounge. Besides, humans were sort of like decorations. Kiu was inclined to think of them as equivalent to low-maintenance succulent plants. The environment was much more lively anyways when the background scenery was changing dynamically due to the antics of silly humans.

Yes — Kiu tried to convince herself that having "friends" definitely was not a bad thing.

She should try harder to make friends.

Mom and Sis would be proud of her if she made friends...

...she had been working hard all these weeks...

...Vesrian counted as a friend, right?

Kiu was drawn back to reality with a snap upon hearing those words.

The green-haired boy, Ves, was staring at her with expectant eyes.

She was standing in the open with her hands hovering in mid air, as if she was about to pull out the administrator's console.

Kiu Lee had learned over time that it was good practice to delete private rooms after they were created. Kiu was rarely the kind of person who used the same room twice, and she much rather preferred to create her reading spaces from scratch every time she came online. Consequently, it was important to release the server resources if she never intended to return to a room again.

There was a blank expression on Kiu's face.

The green-haired boy nervously picked at his fingers.

"Well, I asked you if you would go out with me...?" Ves's voice was almost shriveled up like an apricot at this point.

"Go out? Where? Which server?" Kiu responded blankly.

The next couple of moments happened reflexively without thinking.

With her hands, Kiu dragged open the admin console and made a couple quick taps on the levitating screen.

With a fairly resolute press with her index finger, she heartlessly pushed the [enter] key.

Before she could even blink her eye, there was a flash of light and a notification message floated over her user-interface.

『 Vesrian731 was kicked from your private server. 』

A few weeks later, a rumor floated around her server that the admin 「Q」 had once again rejected a man, strengthening her infamy as the "Legendary Potato" that had absolutely zero interest in men.

That said, a few weeks after that, a few girls on the server also tried their luck at a confession — just in case 「Q」 turned out to be lesbian — but they were also met with an equally unceremonious discharge from the digital kingdom.

By some regard it practically became an Internet meme.

There were not many private servers on MagnoliaOnline (MO), so the mysterious rich bachelorette 「Q」 quickly became an iconic topic of gossip unbeknownst to the user herself. While it was completely unintentional, Kiu's private server population also quadrupled over the upcoming months, and it soon rose to become one of the top-ranked private servers out of pure memes and notoriety alone.

Henceforth, this was how the legend of 「Q」was born...

The Digital Hikikomori
Oldest | Recent
Search
Your changes has been saved.
Action Required