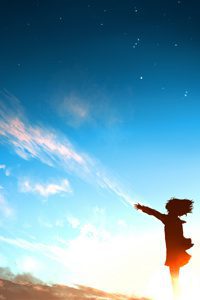 In a world where monsters are dead, Everyone's lv zero.
The world is at peace -- but for how long.

Mannat, born to a blacksmith wants to follow in his father's footsteps. He's determined. He's focused. He's stubborn.
There's just one problem.
He was born with 'Focus' and 'Analyze', both skills favor his mental attributes.

He found living in the village a tough task. Boys his age called him a freak, while the adults whispered behind his back. His parents loved him unconditionally, but he knew they feared for his wellbeing.

He was like a diamond in the rough. It takes a certain eye to find a diamond. Especially, in the dark. Fortunately, a Witch lived on the outskirts of his village.
However, why would an eccentric, diabolical, old hag, help him shine?

The story has been very enjoyable, currently it is a slowpaced slice of life with some nice emotional elements. (Never wrote a review before so idk if my point came across)

It seems like the writer has some backlog they are posting, but for now it's really really interesting. Would recommend, however if you don't like people not answering your questions, there are elements of that here

Edit: I wasn't very clear in the people not answering part there. The one of the characters in the book doesn't answer the MCs questions at all. If that bothers you beware. However if you like that then this is perfect

Its an Unconventional story without cringy characters.

It Started with Slime
By KevalShahAudio
An alchemical experiment has gone wrong and results in a Micro Slime – Resh! This story follows a Micro Slime that has some level of consciousness and there is more to it than meets the eye. Micro Slime is just the beginning of course as it

Loopkeeper (Mind-Bending Time-Looping LitRPG)
By osmarrow
“We know how it ends. We know how we die. And then the Loop begins anew.” On the thirteenth day of Harvest, a mysterious woman enters Haven’s house of government and unleashes a devastation unlike anything seen in this world bef
Action Required