With that, it wasn't rocket science to conclude that Ukon's regenerative ability came from the snake Eiji threw earlier.

Though, Kakashi suspected that it was the snake's ability to merge with Ukon, which was actually the opposite.

It was Ukon's Kekkei Genkai that allowed him to merge that snake into his body!

'I can't afford to waste too much chakra here or use my Mangekyo...I need it for the upcoming fight with Akatsuki. But this regeneration ability makes it hard to finish him while conserving chakra...the other problem is the other one...he still hasn't moved except for the snake and that one air-bullet...should I just disengage as he offered? No, their actions are too suspicious! If they work with Akatsuki and would ambush us when we engage Akatsuki, it would be a disaster! I just need to drag this out until Naruto and co. come to reinforce me. They should already be on the way. With that, we'll have the numerical advantage and can finish this while conserving our strength...' - Kakashi stared with his Sharingan at Ukon who was now fully regenerated.

"NOT COMING?! THEN I'LL COME TO YOU!! HIAHAHAHA!!!" - with a crazed laughter Ukon charged at Kakashi again.

'Isn't that bad? I can't kill Kakashi, or else the future is completely doomed. I also can't just wait until he runs out of chakra, since he is obviously trying to drag out while waiting for his team. FATE!!! WHERE ARE YOU WHEN I NEED YOU?!... Should I just run and leave Ukon behind? Yeah, it's his fault for suddenly starting to attack in the first place...was nice knowing you, Ukon. Good luck!' - in his mind, Eiji said goodbye to Ukon and decided to run.

He turned around and moved not even a step before he stopped: "Tsk, aren't you way too fast?"

Eiji could see Sakura and Chiyo trying their best to keep up with Naruto, who was sprinting at full speed towards his location.

And Naruto didn't look happy, in fact, he was really angry!

That's because he is getting nervous and wants to catch up to Akatsuki to save Gaar as fast as possible, but now he loses time because of Eiji and Ukon in his eyes.

The problem with Naruto being angry is that he was powered up by the Kyubi's chakra because of that: He had fox eyes, and his whiskers grew thicker.

Eiji saw that and screamed internally: 'FUCK YOU FATE!! YOU CORRECT THINGS WHEN IT DOESN'T MATTER OR WHEN IT'S BAD FOR ME, BUT NOW YOU DON'T?! HEY, THEY ARE SUPPOSED TO FIGHT AKATSUKI, YOU KNOW?!'

"Yes, but he said that you shouldn't worry, he will take care of it. Your team should continue towards Akatsuki's hideout." - Pakkun

"Makes sense, every second counts...ALRIGHT!! WE WILL INCREASE THE SPEED!!"- Guy ordered energetically.

At the Akatsuki cave.

"I have something to report. It looks like one of the Konoha forces started to fight the "Lost Hokage" and his partner."

"Hoo...what an interesting development. But this is advantageous for us. We will be able to finish extracting the Shukaku without any interruptions." - Pain

"Hmm...looks like a perfect opportunity to catch my second Jinchuriki...yeah." - Deidara

"No, he is mine. You already caught one, so stay back. I will join the fight and capture him myself...Itachi, what kind of bastard is the Kyubi Jinchuriki?" - Sasori

"Mm? That's all? You have nothing more specific? Whatever, I'll just catch him myself...yeah." - Deidara

"Deidara you bastard...the assignment is one person to one beast, don't push it!" - Sasori

"Don't be like that...how about this? The first one to get there can cat-?" - Deidara was interrupted by the voice of Pain.

"Tsk." - with that they instantly started to move towards the sealed entrance.

For the late chapter, I have a meme as an apology... 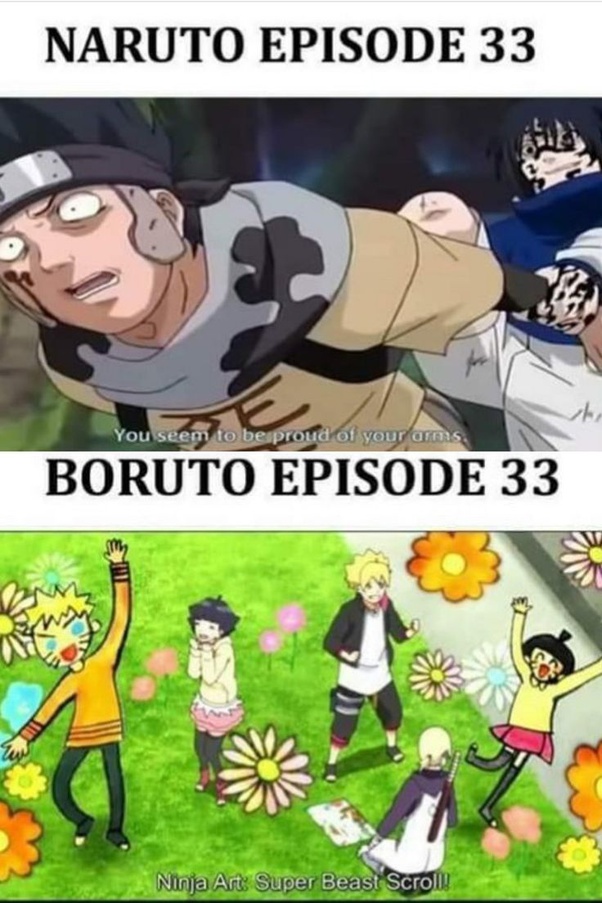