Once the mamaroons I spied coming out of the ground disappear, I transform into an ooze and moved forward. This form isn’t from this world. No way they recognize it as a threat.

In the form of a blob, I roll over to where the mamaroons emerged. I form a tentacle and transform the end of it into the shape of a spade. Then I begin to dig. It only takes a few scoops of earth to reveal a deep tunnel, too deep for sunlight to penetrate its depths.

As I thought. It would take too much power to build a tunnel to the surface every time they wanted to leave. Much easier to simply cover the entrance.

Thank the saints because I would have given up if this required that much digging.

Next comes the task of squeezing myself into their tunnel. Ugh. It’s not difficult. I compress myself, exchanging most of my girth for length and slither through the tunnel as a featureless snake the color of twilight. I can’t feel any physical discomfort but the proximity of the walls is doing a number on my mind. I’ve heard of people who are afraid of small, dark spaces. Starting to understand the aversion.

The tunnel moves upward. Into the hill? The main den must be there. A theory further supported when my tunnel branches out, splitting in three. I investigate a little into each but can’t find any differences between them.

With a thought, I turn into a mamaroon, the form perfectly suited for these tunnels. I take a moment to adjust to the new body. Hmph. I’m not used to being this weak. Or should I say, I remember it and never want to go back. I was hoping I wouldn’t have to use this form but the whims of fate are greater than us all.

My vision hasn’t improved. These things are just as blind down here as I would be. Bastards must use their earth affinity to see. Should have expected as much after the trolls. Sigh.

Luckily, my hearing is up to the task. I can faintly hear a soft mewling echoing down one of the tunnels. I follow it, keeping my mamaroon form as I scuttle down the tunnel. It branches off several more times but I keep following the mewling.

Slowly, the tunnel becomes bigger, the ceiling rising until it opens into a cavern. By this body’s standards. In my prime form, I’d call it a hole in the ground, but as I am now, the ceiling is as high as my house’s. There are pinprick sized holes in it, letting in traces of sunlight. Just enough to make out vague details. Like the several dozen members of the den inside. But they’re different, smaller than the corpses I found. Babies. Not infants, I think. Adolescents, maybe.

There are two adult mamaroons in the corner of the room, watching the others as they wrestle and play. They lift their heads when they see me, one letting out a series of mewls.

Saints. I wouldn’t have gone after the pups of the den if I had a choice but once again, fate. It’s actually being good to me. I remember Cloud saying that the monsters are protective of their young.

With a thought, I turn into an ooze and throw out a dozen tentacles. The soft mews turn into panicked squeaks as I wrap the tiny bodies in tentacles thin as string. Their little claws try to tear me away but it’s useless. No ordinary physical means will work on this form.

I quickly slither through the tunnels, hurrying back the way I came while dragging my hapless victims with me. The commotion draws others. A swarm of angry squeaks and scratching claws echo through the tunnels as the rest of the mamaroons come for their fellows.

As the tunnels start to narrow once again, I have a little trouble pulling my victims after me. Some of the squeaks become painful as I force them. Then softer after a few cracks that sound like breaking bones but I ignore the commotion, entirely focused on reaching the surface before the other mamaroons reach the victims at the back.

One trying to gnaw away my flesh isn’t enough but if five of them try, I don’t know if they’ll succeed. Worse, if they catch up to me, they could collapse the tunnel to trap me. Not dangerous but horribly inconvenient.

I don’t stop once I finally make it out of the tunnel but I do transform back into a blob. Ah, it feels good to stretch without touching walls.

In front of me, the opening of the tunnel I just escaped widens. Mamaroons pour out from it like rats escaping the flooding basement of a restaurant in the capital. They don’t hesitate to throw themselves at me, brandishing two large buck teeth.

I welcome each one, throwing out a tentacle to bind them. I’ve never tested how many tentacles my body can separate into. Apparently, there’s no limit. An endless horde pours from the den, drawn by the cries of their fellows. Three more openings appear in the ground and they rush me from every direction. A sea of fur wherever I look.

I got nervous after wrapping up forty. I calm down when sixty are within my grasp. I don’t even blink after a hundred.

When no more come out of the tunnels after five minutes, I conclude the den is empty. The ones I’ve captured are making a big racket. Big enough to draw predators. Hm. Taking them alive is worth more points but how would we keep them? Not to mention feeding them and traveling with them.

With a thought, I constrict all my tentacles. The squeaks become shriller before abruptly stopping.

The ensuing silence is a bit disturbing. Drives home the point that I’ve just snuffed out over a hundred lives. They may have been monsters but it’s still a bit monstrous.

Good thing I don’t have the kind of conscience that cares about that minor detail. I stack the corpses in a good mood. With this many bodies, my team can kick back and take it easy for the rest of the test.

Just as I’m about to transform back, something lands near me.

If I had eyes, they would have widened to the size of dinner plates. Crouched on the ground is a monster, a cross between a bird and a lion; a stocky body covered in tawny fur with strong legs that end in three hooked talons and a long neck topped with the head of an eagle, the feathers along its neck fluffed up to resemble a lion’s mane. Sprouting from its back are two large wings and a thin tail with a bushy end swings behind it.

That’s a roc. A favorite mount of several knight orders and saints damned expensive. Who in the nine hells is flying around on one of those things in this test? Crap. I thought the instructors wouldn’t be in the Sanctuary. Were they watching the entire time?

But no. Before I get the chance to get worked up, several figures hop off the roc’s back. One of them familiar.

Mr. Four Affinities draws his sword and steps forward, watching me warily. Then his eyes shift to the pile of mamaroons.

Did someone call him the future Harvest Hero? More like Thieving Bastard.

So, it's a griffon but the hind legs are talons too and it's got fluffier feathers on its head. 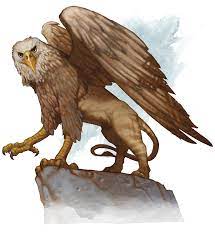 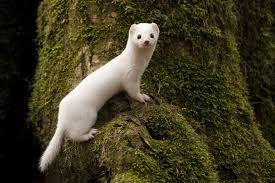 109
Support Reborn From the Cosmos

Reborn From the Cosmos
Oldest | Recent
Search
Your changes has been saved.
Action Required