Sponsored 3/4
Thanks again, Zulima xD (Geez, you people are throwing too much money at me)

“Were you worried about me?” His voice was still rough. He cleared his throat. He could ask all about what happened there later.

Xie Yi pressed his lips together. His eyes were sparkling a bit from the excess moisture. “Of course! And not only me, you made Xue Hua and Ying Hua super worried, too! You can’t do this kind of thing! Your health is important!”

The warmth that bubbled up in his heart was too much to bear. Shi Yue bit his teeth together and clenched his jaw but his sight was beginning to blur anyway.

He reached out with both his arms to grasp Xie Yi and pull him down to his chest.

The young man made a sound in surprise when he found himself tightly hugged to his master. However, he held still and only slightly moved his head so that his ear was placed over Shi Yue’s slowly beating heart.

The Grandmaster breathed in shakily.

No matter how all of this was possible. Xie Yi was not the leader of the Demonic Sect; that man was dead already.

The one in his arms was free of sin - crimes that hadn’t been committed yet, dead that had yet to be killed.

In this timeline, there was nothing that Xie Yi had done wrong.

Shi Yue pressed his face into the black, soft hair.

Xie Yi had the memories of that life, too, didn’t he? Mingtian must have them as well. The gigantic mixed breed that had always accompanied the Demonic Sect leader.

Things sure made a lot more sense now.

Tiankong was Xie Yi wearing the skin of an adult. Mingtian must be much younger than the last time; he had sought out Xie Yi earlier. The two of them wanted to live a better life this time but couldn’t let the Demonic Sect go.

When Xie Yi wanted to move around as an adult, Mingtian accompanied him. He did not reject Shi Yue as he knew that he was important to pull Xie Yi onto the right path.

At the same time, he couldn’t reveal himself as Xie Yi’s beast so that Shi Yue would not notice the hints of Tiankong being the same person as Xie Yi.

He was still missing a lot of information on the things that had happened then but some puzzle pieces were already fitted together.

Shi Yue pressed his tears away. He didn’t want his disciple to see him cry.

Not that it would be shameful. In total, Xie Yi’s mental age was much higher than his own and he had never held back on crying if he wanted to.

He simply thought it was a bit embarrassing.

“Shi Yue”, Xie Yi mumbled against his chest. “Are you crying?”

Ah, he got found out after all.

“In moments like this, you are supposed to ignore it and just hold still.”

He settled again, his hand clenching around Shi Yue’s shirt.

A sort of momentary serenity settled over Shi Yue. He closed his eyes again and moved one hand up to pace in Xie Yi’s hair, his fingers mindlessly moving up and down.

He was hurt, exhausted and his mind was being filled with foreign information. No one should scold him if he let loose for a tiny moment.

At the same time, Xie Yi was trying to figure out how to deal with the situation.

He didn’t mind the position, not at all - his heartbeat was running and his legs were complaining under the strain of the position but this was easily one of the most comfortable moments in his life, somehow.

He could feel Shi Yue’s breath on his hair, tickling him. It was a bit unsteady and nasally, hinting at Shi Yue crying along with a few other signs.

As he was asked, he ignored it.

Shi Yue felt a bit different after waking up and Xie Yi had been badly on edge after the man had fainted again. He had acted weird when he had been awake and the look he had given Xie Yi was unusual.

That’s why, right now, he felt even better. That Shi Yue didn’t avoid him was a great relief.

He had been tired anyway after not sleeping well for three weeks and now he was getting drowsy. It was hard to keep his legs straight.

Shi Yue noticed. It wasn’t that hard to notice considering his disciple’s breathing was getting slower and deeper and his weight was continuously shifting.

He blinked his tears away and tugged at the youth, pulling at him until he was sitting on the edge of the bed where it was easier to lie.

Xie Yi made a small sound, his eyes growing heavier.

Shi Yue’s heartbeat was so nice and steady. His arms were warm and he smelled of witchhazel - the pendant was lying on the bedside. The hand stroking over his head was soothing and the mere fact that Shi Yue had woken up was calming.

Shi Yue couldn’t help but chuckle very quietly when Xie Yi’s hand slipped down his chest without any strength.

When the sect leader came in again, he was followed by Master Chen. Both froze momentarily at the sight before them, but Shi Yue waved them in after pressing an acupoint on Xie Yi to keep him asleep.

“What would you say Xie Yi’s feelings towards me are?”, he mumbled absentmindedly.

Master Chen shared a glance with her sect leader.

“It’s quite obvious that he’s madly in love with you.”

“He is, isn’t he”, Shi Yue said, sounding mildly surprised. It had been like that from the start, right?

This made no sense.

Or maybe it made perfect sense.

He went through the somewhat foreign memories in his head. If he filtered certain things out…

Let’s say he took things at a morally neutral standpoint and put no judgement on crimes for now. Also, if he tried to not think about those scenes with his usual filter of Tiankong = Enemy…

Had… that guy been courting him?

Like a little child, yes, but he had been, hadn’t he?

He had brought him ‘presents’ (all of which were no good, but they could be considered presents), he often appeared with just the intention to watch, he punished those that offended Shi Yue.

Ignoring the terrible execution of those ideas, the general intentions appeared to be to get his attention.

That really was messed up.

He would have loved to ask Xie Yi about it but he knew he couldn’t. There was no telling how Xie Yi would react if he knew that Shi Yue had those memories.

Master Chen watched the dazed Shi Yue for a while before speaking up. “Am I to take it that you have decided to have a relationship with him after all?”

Shi Yue looked down. Alright, not very convincing with how this situation looked.

Still, he was a bit uncomfortable about it.

“He is my disciple.”

“Oh, don’t come to me with that excuse. Besides, he likes you, and you are more and more breaking that fake distance”, she humpfed, rolling her eyes.

It was true that most of the time, Shi Yue would keep a step away from Xie Yi, but the times where he accidentally overstepped the boundaries he had set for himself were amassing.

Just like now, where he couldn’t hide under the cover of coaxing his disciple. A hug was fine, but he was pretty much keeping the young man cradled against his chest.

There really was a problem here. Xie Yi was Tiankong; two people whom he was very attached to.

But Xie Yi was a child -... well, physically at least, since his mind was already much older… Or, not accurate, he was almost an adult.

Alright, so Xie Yi was an adult, but he was his disciple.

…Okay, that was actually his only problem.

He simply had troubles thinking of himself together with a man.

He wanted children with his wife. He preferred women’s softer bodies. Generally, he had imagined for his wife to be a gentle and homely woman.

If he was fully honest, he even wanted her to be someone he could protect - not necessarily someone weak, but someone weaker. Someone to spoil and coax.

He had destroyed whole countries. His nerves were harder than steel if you excluded his currently scarred mental state, he had an insane talent for fighting, he was the type to live through anything - harder to kill than a cockroach (speaking from experience).

Xie Yi was not a soft little flower that he could cradle in the palm of his hand. Neither his gender, looks nor temperament was what Shi Yue had always wanted to find in a wife.

A corner of his mind shouted out in complaint. He was still keeping his arms wrapped around the young man without the slightest hint of disgust.

He shoved it back into its hole and turned to Master Chen.

I've got so much to say that it's under the spoiler.
No spoiler, just lots of talking for who wants to read it.

In the original version of the story, Xie Yi was much more manic-insane and the story was more about comedy than anything serious. Half of it was before XYs death where he brought random presents to his beloved, half of it afterwards (his death was an accident, not suicide). SY was more of a classical calm/haughty Grandmaster and XY just one of many disciples, but very very attached to him and quite weird. After he found out about XYs identity, he used a complicated array to find out about XYs feelings and got the answer "Well, he's head over heels for you." Following that, a very confused cultivator running from his manic-insane puppy-disciple. I might write one or two chapters of this version one day, as an extra.

Next thing, SYs memories are like Mingtian's. He remembers them but it's more of a story than XY, who feels as if it's one straight timeline.

Thennnnn SYs reaction to everything. Before, he mainly saw XY as a child and Tiankong as half a stranger, so there was no real reason for him to have a possibly romantic interest in either. Now he knows that both of them are the same, and moreover, technically an adult. No saying "yeah but age gap". XY is almost physically full grown and mentally, not even a question.
But SY does not want a male lover. He doesn't disdain it but he prefers women and mostly, he wants a cute little housewife. Funny thing is - and I hinted at that somewhere before - he doesn't actually like that type of woman. He can't deal with weak women and is always a bit tense around them because they're too sensitive and don't understand cultivation. Also, he would have to leave them alone all the time. Even if it was a female cultivator, she couldn't accompany him everywhere due to strength difference. So, poor SY has a discrepancy in his conscious and unconscious preferences, which is why he was always bound to have troubles finding a partner

New custom cover! and comments to it! below the next spoiler xD 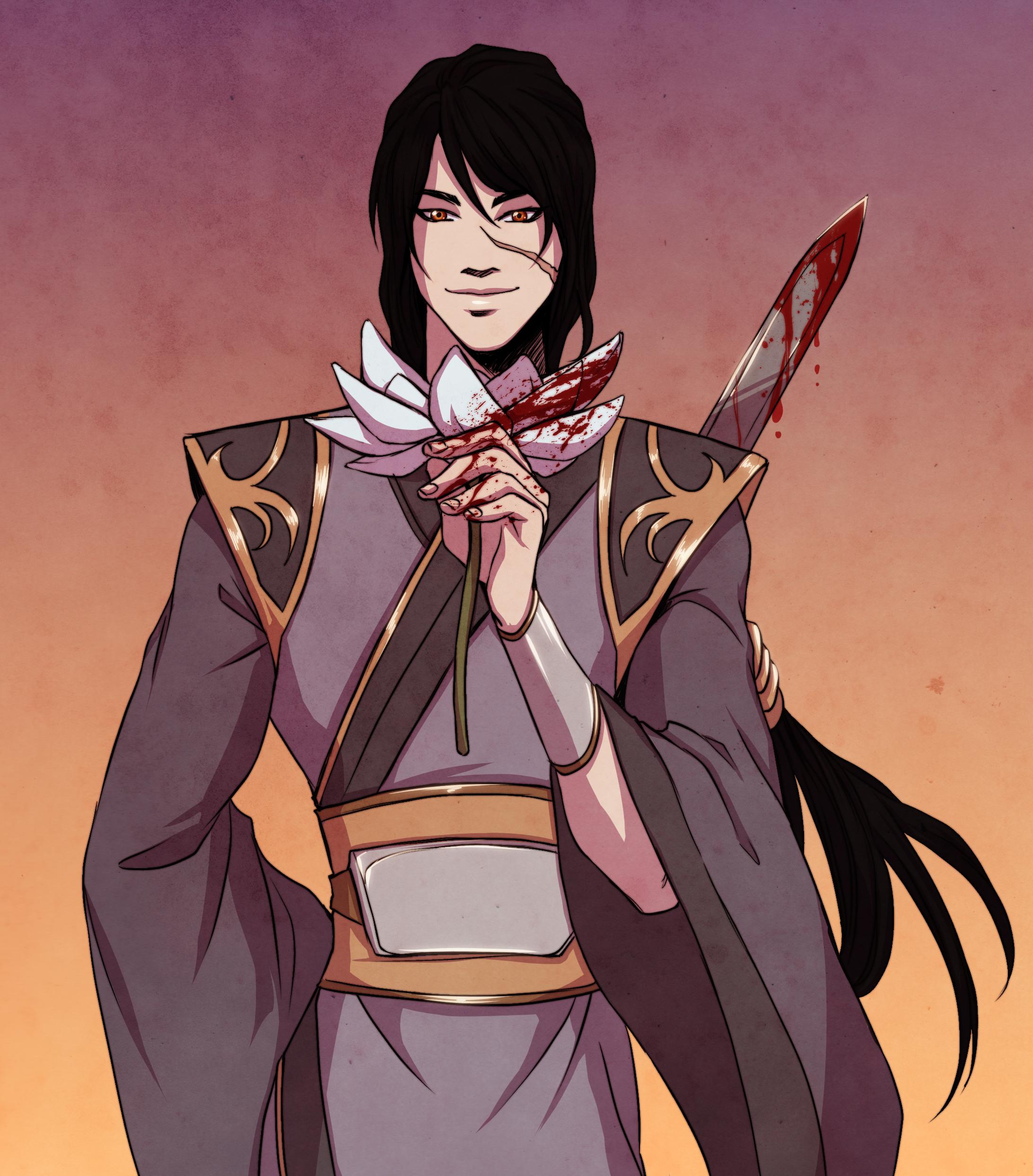 Here's our pretty, murderous baby with his sunset eyes!
Sooo what is he holding here? Very important, it's a white lotus.
What is the white lotus all about in chinese tradition? Generally, it's a sign for purity, but can also be associated with rebirth. The lotus blooms from mud but is unstained by it.
....you might also know that a white lotus is an internet term for a person who looks beautiful and pure on the outside but is quite different inside.