Xu Yan did not speak, so Xie Yi spoke his single sentence. The single bit of information that he wanted to give to Xu Yan.

“Would you believe me if I said I have lived before?”

The phrasing was weird but Xu Yan did not pick up on it. He only stared at Xie Yi’s hands that he could see from this angle. “How old did you get to be?”

“No.” Xie Yi paused. “I couldn’t endure that life anymore.”

“Because of the Demonic Sect?”

Silence. Still, he could see how Xie Yi flexed his fingers, the veins protruding as he did so.

“As he has always been. My brother.”

Xu Yan fell quiet. He only gave a small hum.

It wasn’t as surprising as he had thought it would be. He was even more accepting than he would have thought, hearing such a ridiculous thing.

...Mingtian sure was an amazingly tolerant guy, being treated like a plushie by two boys for years. And that for a beast capable of taking on a humanoid form.

The number of open questions left by this was immense. There was so much that Xu Yan wanted to ask but didn’t. He wouldn’t hear the truth anyway, and most of all, he wanted to wait for Xie Yi to tell him.

“I’ve gotten so used to saying Xiao Yi and MingMing, though…”

“I’ve got no complaints about that. Do you?”

The sound of claws clicking on the floor. Mingtian walked over, brought his front paws up to the bed and poked Xu Yan with a wet nose.

Xie Yi leaned forward, showing Xu Yan a pair of bright eyes that were shining with a gleaming yellow ring around his pupil and the usual red retreated to the ridges of his iris.

Xu Yan looked at the eyes that he had seen once before, when Xie Yi had woken up during his fever, and felt his hair stand up.

“I’m actually a simple person, Xu Yan. I don’t like worrying about being betrayed, so I either don’t trust, or I do. I like you. You’re my best friend, that is the truth. So please don’t give me a reason to think you will betray my trust, okay?”

His voice was soft and even but Xu Yan shuddered.

He sat up and slowly reached his arms out to give Xie Yi a hug. “I know. I’m pretty damn adaptive, you know? I’ve already prepared myself for accepting you being a dragon or something like that. Just another life you remember, that’s something I can deal with.”

He sighed and pat his friend’s back.

“Is that past life the reason why you have so many issues with relationships?”

“The literally only relationships I had in that life was having Mingtian as my brother and being a sub-... no, a trained dog. None other.” Xie Yi’s voice fell to being hurt and disappointed. “Enough of that.”

“Have you told Master Li yet?”

He had never done Xu Yan any wrong in his past life as he had done to Shi Yue. The level of guilt was a completely different one.

“I see.” Xu Yan only stared at the wall. He only knew that a lot has been left unsaid. He could only hope that Xie Yi would be able to forget that past life of his.

Madame Bai wore her usual red, though she had toned it down for the occasion and it was more of a bordeaux red. Tapping her fan against her lips, she looked at Shi Yue who was standing at the window, watching the people outside.

“There’s only so much I can do, Master Li. I hope you’re not mad at me.” Despite having a flirty tone, her words appeared honest.

“In the first place, you’re lucky that he’s your disciple - the info they got is nothing but the stories everyone knows. There are hardly people who know the true extent of his skill, so they couldn’t find anything yet.”

Shi Yue rubbed his eyebrows. “Are they after Feng Yan, too?”

“No. They didn’t care for his info.” Madame Bai sighed.

Similar to the Black Spiders, her own information agency was a very neutral party. Even if someone she was very sure was a demonic cultivator came knocking, she did not skip the task. She had to ensure the safety of her people.

That said, even if they asked for information on Xie Yi, there truly wasn’t a lot of it that she could find out without directly squeezing the info from the Grandmaster himself.

And that was not a task her people did. If the information could not be acquired within a certain level of risk, they wouldn’t try getting it. Violence wasn’t involved, at all.

The number of times that the Demonic Sect had tried to buy information from them could be counted on one hand.

She would be lying if she said it didn’t tickle her personal desire to acquire the knowledge. What made that child so special?

“I saw him walk by. What’s his relationship to the beauty you came by to my humble establishment with a few years ago?”

Shi Yue only threw a glare at her, unwilling to answer. She chuckled.

“What a fierce gaze. I understand, it’s better for me not to know, hmm? Can’t lie about knowing things when you truly don’t know. Your disciple is adorable, by the way. I could eat him right up. Too bad he’s into you, although I have to commend his taste. Nowadays, a lot of little ones believe that the haughty type is interesting.”

“Why in the world would that be?” A bit confused, Shi Yue found himself asking after all. He didn’t watch the love affairs of the disciples, so he didn’t know how times had changed.

“Hmm, a desire to conquer maybe? Like taming an arrogant beast and feeling special. Or maybe it’s because of the thrill. I’d say it like this; for fun, find yourself a wild one, and to settle down, a gentleman. How about it?” She winked at Shi Yue playfully, her cat-like eyes narrowing.

Madame Bai wasn’t offended. Instead, she chuckled. “What are you interested in, then?”

“You did not have that pause the last time I asked you. Good, good! You’ve stayed in contact with the beauty, huh! Has he let his hair grow over these years or not? I have some beautiful red pins. They’ll suit him well for your special day.”

Shi Yue felt a bit helpless. How had she come to the conclusion that he was interested in Tiankong, that is, the adult Xie Yi? “What are you thinking about? I said there is nothing.”

“I’ve got good wine. I know he likes wine, so that will be another present. Sigh, how expensive it will be to send presents for two Grandmasters! ...I believe he was one? Hmm, even if he was a Master, still. Can’t only send a small present.”

“I am not in a relationship with him.”

“What?” Madame Bai gasped. “Could it be you quarrelled? That’s no good, Master Li. You have to be kind, even if your partner is a man. He might not have needed a lot to be pursued by you - he was obviously interested in you from the start - but that doesn’t mean you can relax!”

“Look, I have a brothel. If you need tips, then ask me. I know everything there is to know, everything that shouldn’t be known, and then a bit more. Or is your little disciple the one? They’re pretty similar.”

Madame Bai had a gleeful look on her face, like a fox. Shi Yue instantly became aware that absolutely nothing he could say would stop this conversation, for the sole reason that she was having fun with it.

There was a heavy knock on the door, followed by Xie Yi walking in without even waiting for an answer. He was grimly staring at what he knew was a very seductive woman, alone in a room with his precious master.

Madame Bai gasped and stood up. “Oh my! You’re even more beautiful up close! This robe suits you excellently! Did you choose it yourself? You didn’t, did you?”

Xie Yi tilted his head and gave her a somewhat restrained look. At least her attention was on him and not on Shi Yue.

Xie Yi was wearing the robe that the women had chosen for him. It was a darker shade of violet-blue, with the belt tilting more to reddish. He had Juxian on his left hip - not the right one, to show it wasn’t intended to be used as a weapon right now - and had put his hair up.

His sleeves were the wide type and he was missing both shoulder and arm guards, so his whole look was more relaxed.

“No, I didn’t choose it. The store assistants did”, Xie Yi answered, warily watching the excited woman.

Shi Yue turned to look at his disciple and stared for a moment before catching himself. “It suits you.” 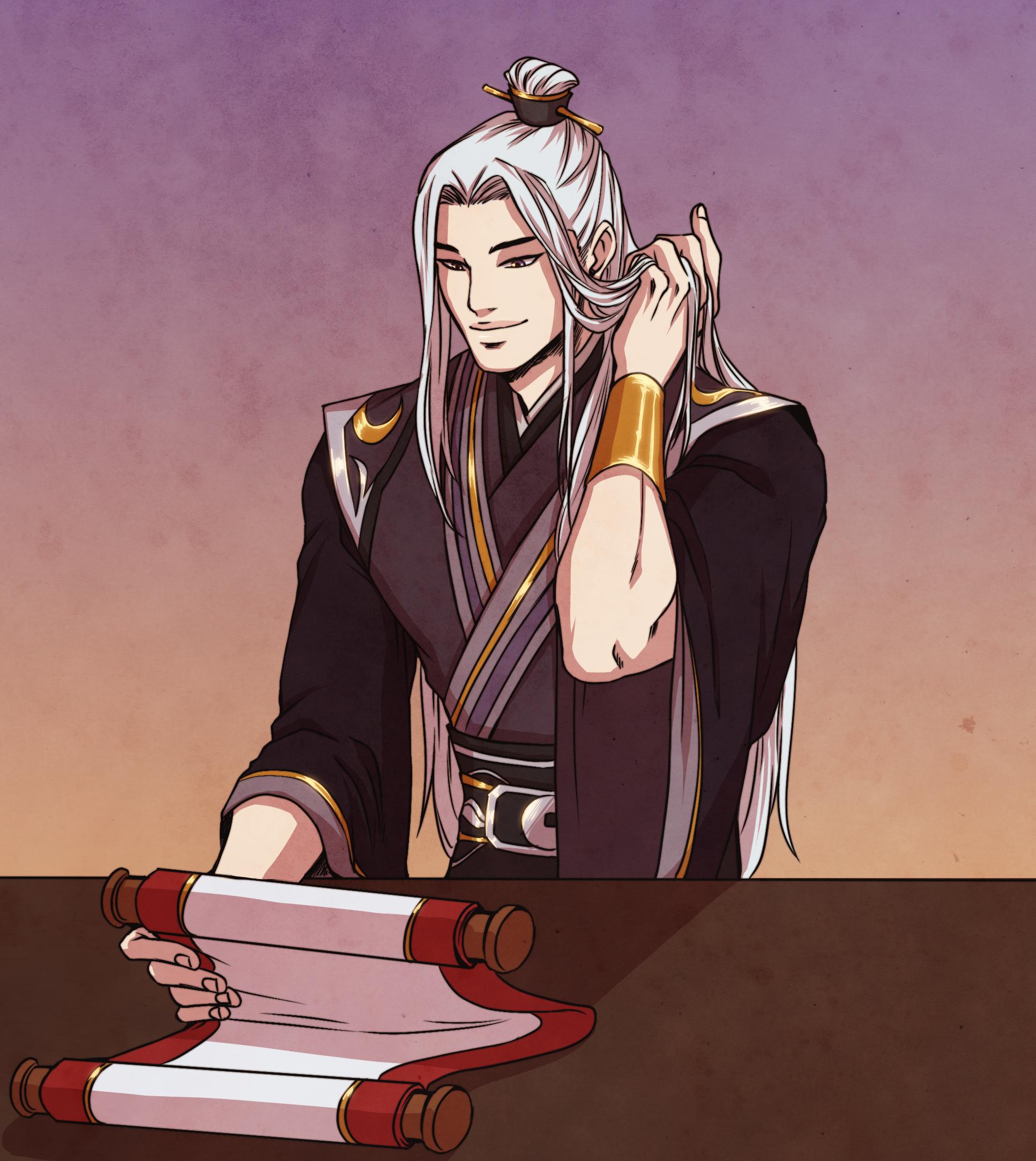 If you feel like you imagined him differently, keep in mind that people have artstyles that do impact things like hell. If I draw Xie Yi and Shi Yue, they're way softer and more childish - I've got a very soft artstyle - even though the setup is the same.
So, you can all still have the style you like in your head, but I'm happy with the images and most of all, they're a great way for you to have a basic idea on how they generally look like, for example their clothes and hairstyles :)
95
Support The Grandmaster’s weird disciple [BL]
Ko-fi
PreviousIndexNext
Report Comment
Cancel
Permalink for Comment #
Delete Comment
\
Reported Message in Quotes