Xie Yi had his arms crossed and his head turned to the side, red eyes vanishing below the black fringe.

Shi Yue knew that behaviour pattern. His disciple was always willing to learn and incredibly talented, but this had always been a bit of a problem that he couldn’t rid him of.

Xie Yi was possessive. The moment he thought that a person approaching Shi Yue was interested in becoming even the tiniest bit closer than ‘barely friends’, he’d bare his teeth and treat them with often unhidden hostility.

That wasn’t a very dangerous thing with an eleven-year-old boy reaching his chest, but Xie Yi was a person with questionable levels of tolerance towards violence.

In this year, Shi Yue had managed to stop Xie Yi from trying to literally curse anyone approaching him, but he’d still sulk whenever Shi Yue forbade him from rejecting others around. There were exceptions, but generally, he just didn’t like people.

“He is your senior”, Shi Yue chastised as he watched the weather outside. It was raining; the drops were hammering against the window as if wanting to create a suitable atmosphere for Xie Yi’s mood.

“...A terrible person”, Xie Yi awkwardly corrected himself. Yao Ming was always going to be a person on his blacklist. Even the fact that he coveted the position as Shi Yue’s disciple alone was enough to put him there, but Yao Ming was an annoyance as a whole.

“Just because you don’t get along doesn’t make him a bad person”, Shi Yue repeated habitually. He was aware of their fights - the sect knew when disciples messed with each other. They just didn’t intervene. Healthy competition was acceptable.

Xie Yi was grinding his teeth as he dragged his hands over the wooden table he was sprawling over.

He had to share Shi Yue with the sect leader. That was okay because that was his grand-master and kind of like a father to Shi Yue.

He had to share him with Xue Hua. Also okay, because Xue Hua was an interesting beast and not clingy.

He had to share him with Ying Hua. Not quite as okay because Shi Yue would send him away if Ying Hua asked for it, but she was often out.

Those three were okay. Anyone else? No.

He would have loved locking Shi Yue up and keeping him only for himself. He had missed out a full lifetime with this person. Even Xie Yi himself didn’t understand why he was so obstinate in occupying Shi Yue’s time, but the thought of the cultivator focusing on someone else was unbearable.

“I don’t agree”, he growled again, glaring at his master.

Shi Yue ignored him and continued watching outside. “It’s not your decision. He will accompany us and I expect you to behave yourself. In return, I’ll overlook the awfully suspicious amount of ink I’ve been seeing in your room.”

Making deals with your disciple wasn’t the norm. Others would be chastised for disobeying their masters, but there was no handling Xie Yi like that. You couldn’t threaten him with anything other than being cut off from Shi Yue, and the one time they had tried that had ended with Xie Yi breaking the barrier around the area and marching right in, looking like a furious demon ready to jump at anyone’s throat. How he had managed to break it was still a mystery to everyone, but it had rendered the child unable to get out of bed for a week afterwards.

Deals worked well and Xie Yi had somewhat learned to watch his limits even if Shi Yue didn’t - mostly because Xu Yan was also around, constantly reminding him of them.

As for playing around with spells and arrays, Shi Yue didn’t try to find out what his disciple was doing. Up until now, no corpses had turned up yet… Or maybe they just didn’t because Xie Yi was good at hiding them. Anyway, he hoped they simply hadn’t turned up because Xie Yi directed his interests to something that didn’t involve criminal activities.

If someone else had ever said he’d worry about an eleven-year-old killing people, he’d have rolled his eyes. But lo and behold: His disciple.

The time that Xie Yi had - likely - spent with a number of demonic cultivators had twisted him enough that even today he still appeared tempted to solve his problems by just getting rid of the people involved.

With an eleven-year-old at a late-stage level two and with a talent for not only fighting but especially using underhanded methods, Xie Yi would certainly be capable of making people vanish from the face of earth.

The largest problem was just as he had thought a year ago when he took Xie Yi in as a disciple. The boy was innocent, in a weird way. His concept of death was warped and many of his violent reactions appeared to be more habit than conscious decisions. He did control himself when you pointed it out, but on his own, Xie Yi was greatly troubled to find the line between acceptable and not.

There were many, many things troubling his mind.

The worst had been when one prank of some disciple had ended with Xie under the influence of a drug that was supposed to pull you into hallucinatory nightmares.

Xie Yi had stilled completely, unnaturally, and just sat in a corner with his sword drawn. His breathing had been incredibly flat as he just stared into whatever his dazed eyes were seeing. For a moment, Shi Yue had feared that he was dead. Xue Hua had come in, hearing Shi Yue shout, and then Xie Yi moved.

Had he been a higher level, the hit would have been deadly - as it was, the humanoid Xue Hua just earned a bleeding cut at his throat. Something about Xie Yi’s movements made it hard to evade them, as if he knew how Xue Hua was going to move.

The spiritual beast had tried to keep the boy in check as Shi Yue worked on waking him up, capturing him and holding him tightly while trying to call him out of his hallucinations.

Xie Yi had reacted by only twisting his head to stare at Shi Yue, then buried his face in the other’s robes and stilled his movements again. For over a day, Xie Yii did nothing but sleep until he woke up with no memory of it ever happening.

Ever since that had happened a bit over a month ago, Shi Yue watched his disciple even closer. It was terrible to see such a bright and talented youth act like that.

“Shi Yue”, Xie Yi wailed. “I really don’t like him! Can’t we take Xu Yan? Or another cultivator?”

“It still is ‘Master’ or ‘Master Li’ for you”, Shi Yue commented subconsciously. The boy had a thing for calling his name. “And no, we can’t. Xu Yan isn’t a Combatant, for once, and Yao Ming is someone who accompanied me on several missions already. It will be beneficial for watching your training to have him around.”

It really was just practice. Hunt beasts in the woods, maybe even a demonic beast. Usually, they’d make disciples over fifteen learn about that, but Xie Yi was an exception for everything. He knew he could easily kill the beasts even without having to practice, but Shi Yue wouldn’t believe that.

Shi Yue intended to see how Xie Yi would fare under actually dangerous situations, which was important to decide on how his teachings would continue.

Xie Yi understood that much - he would have happily gone on a trip with Shi Yue. He just didn’t want Yao Ming coming along. On the other hand, if his master wouldn’t comment on his continuous secret use of arrays…

“Okay”, he finally submitted. “When are we leaving?”

“Early tomorrow morning”, his master answered, satisfied. “I will everything necessary with me, but go ahead and try to pack your own luggage. You will have to carry it, but I’ll do a mental note for everything you have forgotten here that I will have to supply.”

“Un”, he sighed unhappily, then stood up. With a short bow, he made his way out of the room and closed the door behind him.

The building where his lessons had been held also included those private rooms for the higher-levelled teachers that were very suitable for having talks with their disciples without taking them to their home.

After a year, the winding hallways were familiar to Xie Yi. Well-hidden in the walls, arrays that would confuse your sense of direction were placed, which was why the building that had staircases and corners ending in dead ends could seem endless. You were simply being led from one wall to the next.

Xie Yi jogged down the staircase - with the help of supplements he had grown to an appropriate height, even taller than some of the other boys his age. He had also gained enough weight to not look like he might faint at any second anymore, now glowing healthily.

Xu Yan would often lament that he was bound to attract bees and butterflies as he grew older - he always refused to explain what he meant by that, but Xie Yi’s interest in the topic was so minor that he just accepted it.

He opened the door to outside and lifted his head, staring at the endless stream of rain before running right out and slowing his steps, allowing the rain to drench himself.

A huge virtual hug by the two who tipped me, by the way. I really do appreciate that!

A short timeskip to get over the tedious stage where Xie Yi can't really do anything. As for what he has done in that year, we will get to it slowly :3 He certainly didnt quietly stay in his dorm room
Also, have the small sketch from kofi here as well, a very quickly-drawn and rough Shi Yue 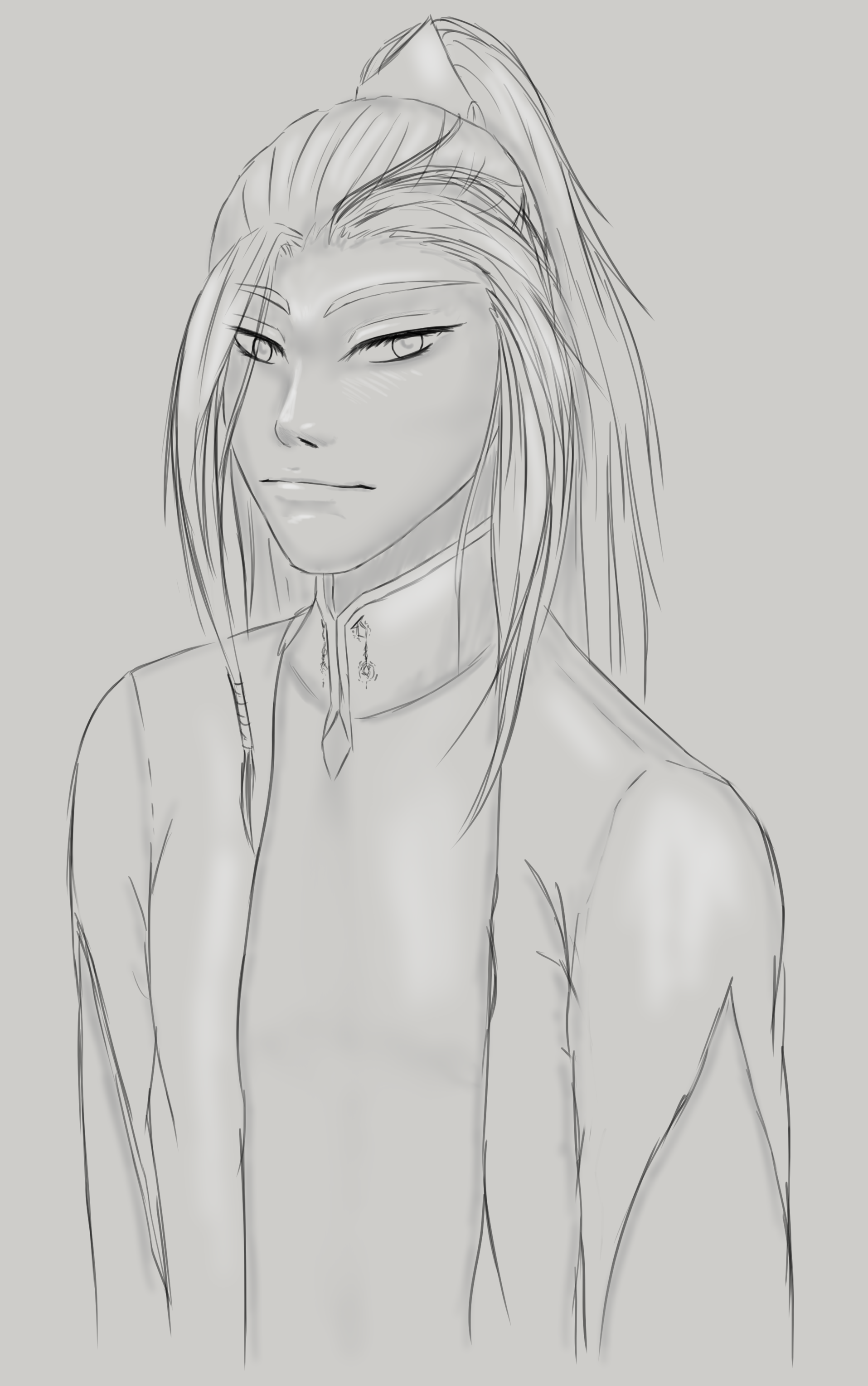