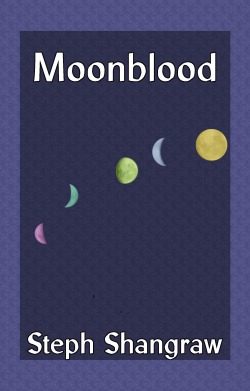 Five moons rise over Evanir, each in her own cycle, and each moon is also a god, one of five sisters.

Many gods create spirit attendants and companions, brought forth fully-formed. Long ago, the moons worked together to create a lineage that are, instead, humans transformed by the mingling of blood.

They intended them to be long-lived and to draw their strength directly from the light of the moon who chose each individual. The five sisters had different goals in mind – one wanted it to be a blessing for scholars and artists, to give them more time and fewer physical distractions; another wanted them to have an animal form, different for each, to keep them more in tune with nature so they could serve as guardians of the wilderness.

There are drawbacks to their children having human lives and personalities before being chosen: not all share the goals of their divine mothers, and some choose to put their gifts to darker uses.

A few carry the blood of one woman who fled the corruption in search of a quiet life. Some joined the family by choice, some by accident; they come from highly varied backgrounds, and have diverse skills. Looking out for each other, unable to settle anywhere for long, they try to help humans when they can. Ultimately, there is no greater threat for them to tackle than the other children of the moons.

Moonblood isn't so much a novel as a series of adventures of varying length. They involve a core group of people, which does grow over time. They take place in a low-magic world, but despite that, our core cast are directly connected to the moons and have various abilities, including limited shapeshifting to a single individual animal form.

As with all my work, unless gender, orientation, or other aspects of sexuality are explicitly stated, I suggest not making assumptions. Probably most significant, I think, is a major trans character who appears about 80K words in - no spoilers, just a note for those who care about that one way or the other.

The Immortal Ash of Yggdrasil – Part One – The Child of Immortals
By JamesLee
Rapture is a young man born into a small world. A hut, a lake, a forest, all barred with walls of towering wood, that is all he has ever known. Yet the day soon arrives when those walls must come down, and the boy is thrust into the wider r

The Bookstore Mage
By Simo
Following the unfortunate news of his grandfather’s passing, Lucien is forced to go back to his old hometown. As the sole living relative, he gets to inherit his old pop’s bookstore. A place where he had spent most of his childhood. There,

The Many Gifts of Malia
By GreenSkyDragon
On Hiatus Once the terrifying God of Death, Charax has retired and just wants to spend his final decades in peace as he fades away. His idyllic existence gets disrupted, however, when his ex leaves a Chosen One on his doorstep. Now with a c

Hogwarts Reimagined
By ArdentlyQueer
Cover by Babbles, who can be found at https://babb1es.tumblr.com/post/625085225587933186/welcome-to-babbles . Thankyou SO much, I love it! I’m sorry it took me this long to put it up! A retelling of the excanon series through the eyes
Action Required