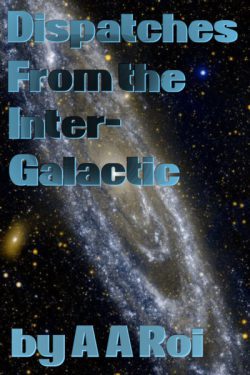 Dispatches From The Inter-Galactic is a series of loosely related satirical stories which take place in a galaxy full of various interstellar civilizations and numerous space-faring species generally described as consentients. It is set in a galaxy which is similar but not quite almost unlike the galactic setting of my other series Up in Space.

While there are numerous themes related to interstellar life, several of the stories directly relate to specific themes such as;

The pan-galactic ramifications to the use of supersymetrical energy sources (often drained from intera-located alternate and pocket realities.) the use of which by most interstellar civilizations is steadily increasing the overall amount of Dark Matter. This is increasing the mass of the galaxy and results in the occasional rips in inter-dimentional space as well as an overall increase in supernova activity. It is also speeding up the approach of the galaxy in Andromeda, which is of concern to several long lived civilizations;

The Morphoids, a race of shape-changing consentients who are capable of using the space lanes created by the use of supersymetrical sourced energy to spread throughout the galaxy. They are currently viewed as threat number one by many space-faring species;

Xeno and exo-sexuality, as many species try to figure out what sort of enjoyment they can have with many of the species they encounter in space (only some of which are carbon-based, or more rarely, humanoid in appearance). This also relates to the altering of species to make reproduction somewhat easier for those with rather complicated lifestyles. A major force in this area of pursuit is the galactic visiteering industry, which promotes the ‘uplifting’ of more primitive planet-bound near-consentients.

Genre
ComedyHorrorMaturePsychologicalSci-fiSlice of Life
Tags
Aliens
Show
Table of Contents
Write a Review
Reset Filters
X
Write a Review
You must be logged in to rate and post a review. Register an account to get started.

Hells on Earth
By RodneyGoodall
RedEye sweeps the world in a matter of weeks killing almost everyone then turning them into zombies. This creates the first hell of the story. But it is not the last hell. Zombies are just the warm-up. One chapter every three da

The Valkyrie
By Kathryn
Jason is a normal guy caring for his dying father, when a chance encounter with an alien symbiote changes his life in unexpected ways! Set in my “Tales of Empire City” universe. Also published on TGST and Royal Road

Morbid
By Bokuboy
Arnold was a strange child. Not the normal strange, he was too odd even for that. There was something wrong with him. No one could really tell until it was too late. He had become Morbid. Please Note: I publish daily.
Action Required