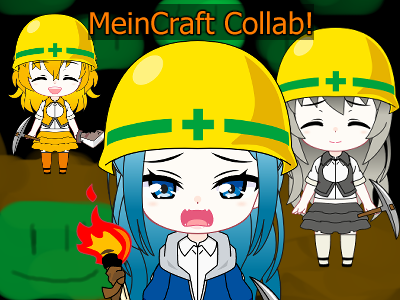 [killerwhale] *LOL. Looks like Hana doesn't trust her Big Sister Aoko.*
[uglyrat] How come I can see this exact situation happening? XD
[relevantdoggo] Hana is just standing there... menacingly.
[bubblypanda] Look at all the slimes!
[Alfis_OldChair] Alfi! That pickaxe is in the wrong hand!
[Aoko Ryuusei Ch.] Hana! Why am I running away in the thumbnail?!
[obnoxiousottor] *Not even in the stream and Queen is panicking.*

[icyiguana] *Alfi looks so sorry for Aoko*
[puffypuppy] *That's because Aoko's a second away from a zenloss*
[fillerfish] So the Creeps have moved on to Aoko-chan, huh?
[eccentriceel] I'm in this picture and I love it.
[yellowmouse] So you're saying you're a creep?

[Poppy Gloria ✓] Good luck on your stream, girls! Kill 'em dead!
[supportingskunk] Our most reliable news source!
[nosylion] @Poppy Gloria ✓ Any news on John and Titor yet?
[timidtarantula] I think Hana's definitely going to be killing something...
[mouseymouse] Everyone looks so cute!
[naivenugget] *Is this server public?*

[GoldenOrca] So. Bets still up for Queen dying? And bingo still on?
[StraightGarbage] Obviously.
[Alfis_Knight] I would hope that you would respect your oshi more...
[Hana's_BigBro] Hana, no! Let her take the hits for you first!
[fishytuna] :sweat:
[uglyumpire] *This stream is going to be a hot mess... I can't wait!*

[StraightGarbage - 20K yen] Dammit Queen! You're supposed to die later!
[openoctopus] www
[eagerbeaver] *LOL. I can tell how this is going to go.*
[nightfox] Sasuga, strongest imouto. Willing the thumbnail into existence.
[purpledinosaur] Where did they even spawn? This isn't a new world, right?
[yellowgiraffe] RIP Aoko-chan.

Hana's laughter echoed and then she said, "Aneue! I haven't even started the transition screen yet! How'd you die?!"

Alfi giggled and said, "Aoko-chan! You're supposed to run away from the Creep, not towards it!"

"Why the heck do I have to press four buttons to run?! What kind of game is this?"

"Then why the hell didn't she say control?!"

Hana let out a deep sigh. "...Try not to die again, Aneue. And help keep her alive, Onee-chan."

[suspicioussnake] This is going just like how I thought it would.
[trollfrog] Good luck, Alfi!
[jumpyturtle] So... Aoko's bad at games, huh?
[GoldenOrca] So this is why you've been avoiding game streams, huh Queen?

Hana laughed. "Don't make fun of Aneue too much, everyone. She might act up again to get attention. My big sis is a bit of a diva, you know?"

A flurry of orange leaves filled the screen, and then the thumbnail vanished, replaced with a streaming layout.

Hana smiled and waved her hands. "Ohanayo! Thanks for coming, everyone!"

[gratefulgrouse] Thank you for streaming!
[wishingpenguin] Hope the practice is going well!
[FailureFox] *Don't break a leg, Queen! Wait until the concert!*
[GimpedGecko] *Yeah! Then you can break mine!*

Aoko glanced to the side, reading something. And then she rolled her eyes and said, "Stop it with your kinks, you bastards. And practice is going great, thank you very much."

Alfi giggled and said, "Don't mind her, everyone. Aoko-chan's just grumpy because she hasn't seen Betty in a while."

"I am not!" Aoko snapped and said, "And I have! For your information, she wanted to show me what she was up to and invited me for dinner yesterday."

Hana blinked and then looked at Aoko. "But Aneue... Didn't we have dinner together with Onee-chan? When did you have dinner with Eldest Sister?"

[curiouscat] Oho?
[yummyquail] A midnight snack... With Betty?
[lewdlemur] Is Betty as sweet as she seems to be? ( ͡° ͜ʖ ͡°)

Aoko blushed and said, "Stop that! It's not like that!"

Alfi pulled out a cup from off to the side and took a sip. After that, she nodded and said, "That's right. Aoko-chan is too cool to be Betty's new toy. Betty likes cute things that squeak and break easy so she can fix them up afterwards."

Alfi tilted her head. "...Did I say something wrong?"

Hana and Aoko looked at each other.

"What?" Aoko frowned and said, "You said we're chopping down trees, breaking mountains, and killing everything in sight for resources."

Alfi nodded. "Papa always told me that telling the truth is better than telling a lie. Especially to a crowd of people." She paused and then placed her right index finger on her chin. "Though I think he also said that a tiny white lie might be just as good if it's women and you look handsome..."

Aoko rubbed her face. "Why am I not surprised at that guy's parenting...?"

"Hey!" Hana frowned and said, "Mister John is a great father!" She paused. "I think. I mean, Onee-chan and Eldest Sister turned out alright, didn't they?"

"Ah!" Alfi smiled and said, "Aoko-chan is alive because I'm defeating all of the monsters for her- Ooh, a glowing sword!"

Hana laughed. "Onee-chan really is lovable, so I can see that." After saying that, she clicked the button to connect to the server.

[Alfis_Knight] YOU ARE!
[Alfis_OldChair] I'll love you even through ten thousand lifetimes!
[Alfis_Servant] *I don't care if Alfi's a robot and immortal! I'll fall in love again each time I get reborn!*
[SensibleSquirrel] *Whoa there. Calm down.*
[MisterVeggieTales] *I bow to no one except my God and my king!*

[StraightGarbage] Hah. They're calling us weird.
[GoldenOrca] Are we not?
[AccomplishedArse] We might be weirdos, but we're *rich* weirdos.
[StraightGarbage] Says you. I'm busting my @$$ off here to pay Queen tribute.

"Gah." Aoko flinched and placed her hand over her heart. "How and why do you keep doing that?!"

"Hm?" Alfi turned to look at Aoko and said, "Doing what, Aoko-chan?" She tilted her head and said, "Did I say something wrong again?"

"Aaargh..." Aoko blushed and pointedly looked away from Alfi. "It must be in the genes. That bastard's flirting has gotta be genetic."

[Hanas_BigBro] Nice segue, Hana!
[BetaXAoko4Eva] *No! But my ship!*
[Kiiro-chi✓] So Aoko confirmed Bi. Got it. Now to update my doujins...
[luckymouse] *gasp* Kiiro-chi?!
[hornysnake] @Kiiro-chi✓ When are you releasing your compilation of the Aoko Dom series?
[Kiiro-chi✓] @hornysnake I'll be busy soon, so maybe next year.

Hana's game finally finished connecting to the server. A soft *plop* echoed as her character spawned in. And then.

It was night time in the server. Despite that, it wasn't dark at all. And the reason for that...

A birch forest in the distance, blazing with fresh flames.

A grassy plain covered in fire with sheep and cows dying left and right, leaving behind cooked meat.

Random gouges in the ground, and Aoko's character standing in a trench with a stone shovel in hand.

And then there was Alfi's character in the background, setting off a ring of fire with a flint and steel.

[GoldenOrca] Dammit. Who had Alfi setting fire to the world?
[StraightGarbage] Hah! I told you! Cough up that 10K!
[MiserableMouse] Bingo! @GoldenOrca You owe me membership when they open!

Some controversial tags, but I think the guro will drive everyone away.

[responsiblerabbit] Where are all the mods these days?

Bold of you to assume there were mods in the first place.

[nosylion] @Poppy Gloria ✓ Any news on John and Titor yet?

Oh yeah, what’s going on in the bandwagon scene? How’s the stuff for all the channels that inevitably try to ride off them for internet street cred? Y’know, the drama guys?

Where the hell is this universe’s Keemstar?

ITS NOT THE ORIGINAL SWEDEN YOU HERETIC NOOOO

[suspicioussnake] This is going just like how I thought it would.

Their personalities are very easy to read.

[FailureFox] *Don't break a leg, Queen! Wait until the concert!*

[GimpedGecko] *Yeah! Then you can break mine!*

[curiouscat] Oho?
[yummyquail] A midnight snack... With Betty?
[lewdlemur] Is Betty as sweet as she seems to be? ( ͡° ͜ʖ ͡°)

Aoko blushed and said, "Stop that! It's not like that!"

She should be learning by now. She’s so damn easy to tease.

Alfi tilted her head. "...Did I say something wrong?"

How can she be this lucky and still come up with these sentences?

[Hana_Bro_101] It's good to know that there's always someone weirder out there.

Weird knowing that the loli’s community is the least weird.

[StraightGarbage] Says you. I'm busting my @$$ off here to pay Queen tribute.

[MisterVeggieTales] *I bow to no one except my God and my king!*

When are we gonna get a Veggie Tales Facts cameo?

[Kiiro-chi✓] So Aoko confirmed Bi. Got it. Now to update my doujins...
[luckymouse] *gasp* Kiiro-chi?!
[hornysnake] @Kiiro-chi✓ When are you releasing your compilation of the Aoko Dom series?

[Kiiro-chi✓] @hornysnake I'll be busy soon, so maybe next year.

Also, if any of you idiots ship the loli, or make a doujin about them, I’m getting Hitman on your ass. I don’t care. You will not see the light of day again.