It was the original promo art for the Project MirAIs concert. Or rather, the actual promo art instead of the one that John put on Readit with Jenny and Titor's silhouette.

Hana, Alfi, and Aoko, standing in front of faded Superchats glowing behind them.

The image shrank down, moving to a corner of the screen and then revealed a familiar newscaster. A woman with short blonde hair and clear blue eyes. Poppy Gloria.

The volume of the TV was a bit low, making it hard to hear for most people.

But Beta wasn't most people, so she could hear it just fine.

Poppy Gloria shuffled a stack of paper in her hands and then let out a bright smile. "What an incredible performance. I mean, I'm biased, of course. After all, I just absolutely *adore* each of the girls and their streams. But you don't need to take my word for it. Have a look for yourself."

Poppy waved her hand, causing the screen to fade to black. And then when it did, clips of the concert played.

Hana, singing an upbeat cover of an otherwise sad song.

Alfi, singing her heart out about a love that would never fade.

Aoko singing a real idol song with everyone else cheering along.

But not only that, the clips showed how the stage changed with each song, the seamless transition between different sets.

Poppy spoke over the clips and said, "Can you believe this? What you're seeing right now was live. Not prerendered, but live footage from a live performance."

The clips faded out, turning back to the typical newscasting layout.

Poppy shuffled her papers again and then shook her head. "I remember being impressed enough with Mister Smith during our interview, but to think that he had this much in stock... Myth Incorporated really lives up to its name, doesn't it?"

...It seemed like her father's bad habit of going overboard still wasn't fixed. Or rather, it seemed like it was inevitable for her father to draw attention to himself no matter where he went.

She should have expected it after being with him for so long and cleaning up so many messes, but she would have liked to think that it would have been settled after Mother showed up to calm him down.

Beta fiddled with her sleeve and then muttered, "Not my problem."

And it wasn't. If her father wanted to go overboard and take the world by storm, it was his problem. And he seemed to have some competent support staff around to help him with that.

Qing and Bai seemed decent enough. And now that it was clear that Titor was a real person... who Beta still felt was related to her father in one way or another with how eerily similar they were, she wasn't too worried.

At the least, it wasn't like they would have to fight off any cosmic beings that could end all of existence anymore or negotiate between immortals that didn't care how many lives were extinguished as long as they gained more power.

The most that could happen was that her father would slip up and do something outrageous to clue people off that they weren't quite normal... but even then, her father could just turn time back without anyone knowing.

...Something that Beta suspected he had probably already done, knowing how her father was.

Beta shook her head and then shifted her attention to her surroundings.

Emily was still ordering their drinks and treats while chatting with the cashier.

That strange man was still sitting at the table, holding a cup of coffee. However, that cup was completely forgotten as he stared at the TV.

...Hopefully Mother would reel Father in a bit.

"Beautiful graphics, seamless transition between reality and virtual reality... And look at those models! Boys and girls..." Poppy stared right at the screen and said, "The time has come. Anime is real. And Anime is coming to the real world."

That was right. And if things went well for them, Ars Nova Productions would have a role in that as well. With the adaptive story telling system and the evolving character gestalt protocols... Well, things would get interesting.

"As for the man... or rather, men, responsible for this miracle..." She sighed and said, "Unfortunately both Mister Smith and Mister Titor were unavailable for comment. However, the two did say to keep an eye out at Comiket and the Winter Tokyo Electronics expo this weekend and the next. No one knows what other mind-blowing announcement they'll drop, but I for one will be waiting with bated breath." She placed her papers down and said, "Back to you, Gomi-san."

Poppy waved her hand, causing a screen transition. When it did, a generic male newscaster with side-swept brown hair appeared.

"Thanks, Poppy. Now in today's news, there was an unexplained accident in Shibuya where hundreds of cookies and popsicles have been found littering the streets. Local authorities ask that anyone with information contact. In other news, a foreigner has traveled to Japan and started up a new religious cult dedicated to a blonde goddess of song and dance..."

Beta tuned out the news after that. Mostly because she wanted plausible deniability about hearing about a potential church opening up again to worship the mythical 'Jenny Smith.'

That had been annoying and scarring enough to deal with once in her lifetime, thank you very much.

"I got everything, Mistress!" Emily walked over, balancing two drink trays in one hand while carrying a pair of bags in the other.

Beta sighed and quickly walked over to take a tray of drinks away. "Again, while I respect your ability to handle tasks and your diligence to meet my requests, you should not strain yourself, Emily."

Beta grabbed a tray of drinks and a bag from Emily before shaking her head. "It is fine... but feel free to rely on me as well. It would not be fair for me to rely solely on you for everything."

Emily's eyes widened and then she let out a bright smile. "Yes, Mistress!"

Beta nodded and left the store, Emily trailing behind her.

Once they were outside, Emily moved to Beta's right and said, "By the way, Mistress... You were really interested by that news report."

"Mmhm!" Emily nodded and said, "Mistress is usually stern and serious. I mean, you smile sometimes and you're always nice to me when we..." She blushed. "A-Anyway... Mistress always seems to be watching the world while not being involved. But when you were watching the news report, you seemed... Normal? Not that you're weird or anything! But..." Emily furrowed her brow and said, "I don't know. Mistress usually seems so unreachable like a goddess. But just then, you seemed like one of us."

Beta's eyes widened and then she sighed. She shifted the bag of treats to the same hand as the drinks and then ruffled Emily's head. "My apologies, Emily. It seems like I will have to make more efforts to relax then if that is how you see me."

Emily shook her head. "It's fine! Mistress is great the way you are! And you really are like a goddess, so-"

"But I am not a goddess. And even if I was... I would like to think that you and I could be friends, along with Sakura and Ichiro. So let me know whenever I seem a bit too distant, will you?"

Beta smiled and then pulled her hand back. "Now let's head back. I think that we have subjected Ichiro to enough trial by fire, haven't we?"

Emily's eyes widened and then she giggled. "I think that guy hasn't had enough trouble with how often he misses deadlines... but I guess you're right. Let's go, Mistress!"

After Beta and Emily left Starbox, a man left as well. The same one that Beta had noticed.

He didn't appear too special. A typical businessman in his late twenties, wearing a suit and slacks. Side swept black hair, a bit of wrinkles around his eyes. In short, a typical Japanese salaryman.

The only odd thing about him was the bag in his left hand with a NERV_GEAR box peeking out from the top.

The man reached into his pocket and pulled out a phone. Staring at it, he muttered, "The world has really changed a lot since I left, hasn't it?"

2016. That was the last time he had been in Japan. Now, it was 2024. Eight years since he first envisioned a virtual idol agency after showing off his prototype tracking software with the early VR headsets.

The man slipped his phone back into his pocket and let out a genuine smile. "But this is great."

A means to help the idols struggling to make it and shine a light out into the dark. A way to leverage technology to help those with talent but who lacked the looks or confidence to make it the traditional route.

After meeting a pair of high schoolers who presented the idea to him, he worked hard to try and make it a reality but...

"I hope those two are doing well..." The man... No, Akira Yato (明 夜ト) sighed. But then he shook his head and said, "No point in dwelling on the past. For now..." He reached out and tapped the air. "It's good that someone is out there helping people like how I wanted to, but there doesn't have to be just one, right? A bit of competition in an industry is healthier than a monopoly. And since I've already saved a lot of people in that place, I might as well keep doing it here."

Staring off into seemingly empty space, Akira started walking and said, "Let's see... It'll take a bit to set up and I need to do some research onto what is and isn't allowed here, but to start with... Shield Corp doesn't sound too bad, does it?"

Felt a bit under the weather yesterday, so I took the day off. Anyway, Yag- I mean, Yato-san returns at last!

We'll probably have a bit of a timeskip next chapter to Comiket and shenanigans as John is forced to man the booth while his family and friends roam about the place in full cosplay. Or something. We'll see when the time for that comes.

As an apology for the wait... and for the probable no chapter tomorrow due to Black Friday shopping, have a picture.

Meggie's Aunt Xuannu is right about her growing up to surpass her older sisters, you know? Say hi to Meggie a couple of years later after puberty hits her.

John is NOT prepared. 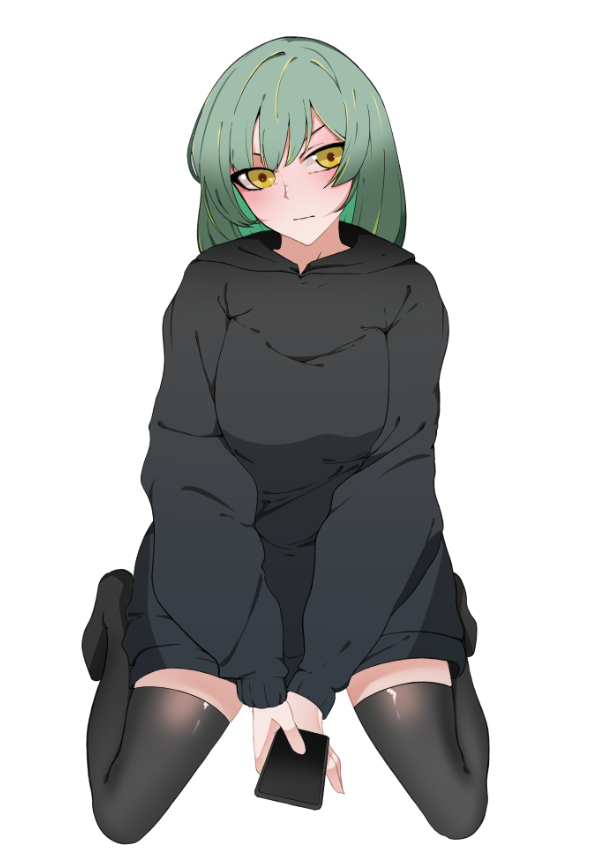