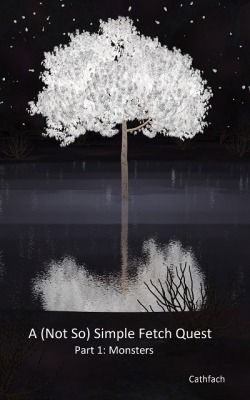 Oh great hero! The evil Demon Lord has once again arisen to terrorise our lands, and we have summoned you to save our people!

No, we don't want you to fight the demon lord! Of course not; we're the good guys! What sort of good guys kidnap people from other worlds and force them to take part in wars that have nothing to do with them? That would just be plain evil! We'd be no better than the demons!

Katie, after her summoning by an excessively loud mage suddenly takes an unexpected twist, is sent off on a simple fetch quest, with a promise that she'll be back home in five minutes at most. She doesn't even need to leave the building. Alas, when a goddess' blessing causes her wish for an actual adventure to be taken rather more literally than she expected, she finds herself lost in a dark cave, far away from the sword she was supposed to acquire and far too close to a population of giant bugs. Still, at least she wished her life wasn't in any danger. Among other things.

Be careful what you wish for. You might just get it.

This is a dark litRPG adventure, both in terms of Katie accidentally wishing all the lights out, and also in that she loses as often as she wins, often with horrific and disturbing consequences. Luckily, Katie isn’t the sort of person to let a mere grizzly death or two get her down, and is prepared to try, try and try again to get her hands on the holy sword and finally complete her ‘simple’ fetch quest. Or perhaps—with a few resistance skills under her nightie—she might even come to enjoy losing. Not that she’d ever consider forgoing revenge, even if she did.

I’ve ticked all the content warning checkboxes for this one. There’s no explicit sexual content, but there are enough references to justify the warning. Profanity happens rarely, but Katie isn’t averse to swearing when she gets particularly angry. As for gore, it doesn’t get much worse than the first few chapters, but there will be occasional chapters that have extra content warnings.

This is definitely worth the read, I stayed up an entire night just binge-reading. Really surprised that this isn't more popular. This is now one of my favorite stories.

To put it simply, I'll be checking daily for updates. Love what you're doing, author, so don't give up.👍

Demoness Reincarnation: Waking up in this new world, I shall live life without regrets with the Evil God watching over me!
By ChocolateLover030
Your typical isekai trash ft. Rei Hoshimiya, who one day wakes up in a dungeon in the body of a demon. Upon figuring out that she had been reincarnated, Rei has only one thing to do first… Escape the dungeon. Afterwards, who kn

World Symphony Mediator
By oofcat
[World Symphony] A popular VRMMO that gave its players high fantasy worlds and a classic RPG feel. Ai was just one of the many players that played the game for the very first time. As a new player, Ai decides to follow what the [World

Unbound (LitRPG Isekai Fantasy)
By Necariin
A New World. A Thousand Threats. Welcome to The Continent. Felix’s life on Earth had become a series of dead-end jobs, ruined relationships, and rotating apartments smaller than most postage stamps. By all accounts, even his own, he w
Action Required