Despite being a veteran of the game, Damien has never survived a playthrough with Damien Nightshade...

Will Damien be able to survive this time with knowledge of future events?

But first, maybe he should deal with his maid, who has a dagger behind her back. 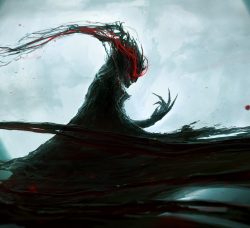 Already been reading the authors novels since day one. Although he dropped his first one for the understandable reason of it being not very well planned out this one has had a drastic leap in quality. I cant say much about the plot yet because the novel only has a few chapters for now but the characters seem interesting and have depth to them. It's an interesting premise and I'll be here to see where it will go.

The novel has just barely started but so far it looks like it'll be a fun ride. The characters seem interesting and so does the world. This review might contain minor spoilers but since I haven't read all that much, it shouldn't be too bad.

So far I really like the MC, he got reincarnated as Damien Nightshade who is both not a very powerful vampire and a slaughterer which makes him at odds with pretty much any living being. The MC has been reincarnated as Damien and has both traits from his original side and some less than appealing traits from Damien such as bloodlust and being a bit of an ass in general. The only real side character we've seen is Fay, his bloodslave, who hates him and, in the game, goes as far as killing him by stabbing him a lot. More depth has already been added to her character via a minor pov shift and by explaining some of her circumstances which make her a more compelling character. The world obviously isn't all that much currently but it has the potential to be developed quite well. There seems to be political intrigue in that his bloodslave is being hunted by her upcoming husband and him beng hunted by his brother for being a worthless noble vampire.

The Slave: Pride
By Elnight123
It tells the story of a man named Rainier Beringer, a 25-year-old young man who failed to become a normal human; for him, the world is just a place to accept all the bad luck he has experienced. Until in the end, he was caught up in an incident wi
Action Required