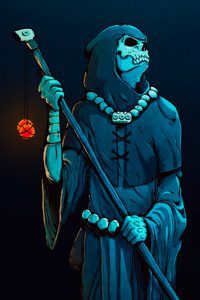 After fulfilling the duty all arch necromancers are tasked with, Sylver Sezari was not expecting to ever wake up again.
But he did.
And after crawling his way back into the land of the living, he’s alive once again. In a strange land, a strange time, and with a strange floating screen in front of his new face.
Either through plan or chance, he’s alive again, and planning to enjoy himself to his heart's content.

-The story isn’t grimdark, but it’s not all sunshine and rainbows either. There will be lighthearted and positive moments, as well as some sad ones. That being said, it’s a whole lot more light than dark.
-This is a LITRPG story.

Author’s note:
-It can get very GORY. I’m somewhat desensitized to gore and violence. So while the story isn’t full of gore for the sake of gore, it can get a little too descriptive.
-The MC is a necromancer, so corpses and decay, and all the things that come with it, will be mentioned from time to time.
-I’m a huge fan of Egyptian, Slavic, and Greek mythology, so expect quite a bit of that. That said, so much is altered, you’ll be hard-pressed to guess how exactly it is being used.
-Despite being ‘immortal’ the MC can, and will, die. In the event he does, the story doesn’t end, simply time skips forward. Which in some cases is going to be worse than just dying.
-I love plot twists, as much as I love red herrings and Chekhov guns. Deus Ex Machina’s not so much.

One of the best stories, I've read on this site so far. The tempo is right, the characters and the background are well fleshed out. Seeing the main character grow and gain friends while he is going on adventures is entertaining. Even though, a necromacer does gross things and the "gore" tag is there for a reason, it is written in a way that is non repulsive and the author finds the right balance.

Having read through the first book, I definitely hope for the next chapters to op up soon. If this comes out as a real physical book, i'll try to get my hands on it.

This story's chapters are very filling with a nice hefty size and little to no filler. This leaves me both satisfied and wanting more (if that makes sense). There are many little surprising twists that keep the novel fresh and different from others of the same genre. The author doesn't go overboard with the twists and make the novel labyrinthine. Often times I find myself chuckling at the humor, but the novel doesn't become too jokey and ruin itself. I just finished the first arc at chapter 46, and I am overjoyed that this author nicely wraps up his/her arcs with no obnoxious cliffhangers.

I enjoy the main character greatly. He's complex and dynamic, but not convoluted. He becomes more than the average protagonist through the trials he faces and the tough and morally questionable decisions he's forced to make. These trials are what show the reader his complexity and his fluctuating thoughts instead of an author just telling us. Yet he remains relatable and likeable after all those hard decisions he makes.

The novel remains firmly centered on the main character and his constantly changing environment, so the other characters receive considerably less appearance in the novel. This causes the other characters to seem a little faint. However, most of the characters feel like real people due to how unique they are and how they don't feel like they intentionally revolve around the MC. They do a little purely because the novel itself revolves around the MC, but they are by no means vapid. Even some of the enemies that appear for only a couple chapters, the ones that have actual dialogue, make me feel like they could be real people because they aren't all the same, they don't all feel like simple disposable evil incarnate, and they don't feel like their only purpose is to be opposed to the MC. Like the

overconfident Bandit who held herself back from laughing at Sylver's joke.

I like to imagine this novel as a canvas where the author is painting the characters with words as his/her paint. Almost every character is well detailed and interesting. Again, they are so because of what they say or do instead of the author just saying, "He/She is tall and has brown hair." It's clear a lot of thought has gone into them, but most of the paint (words) the author had was used on the main character. This is what causes the other characters to feel faint. Especially in contrast to the MC.

But I don't see this as a problem, just a part of the genre. This novel is not slice of life. It isn't about a group of people that hang out together. It's about Sylver, his struggles in a world that is confusingly both familiar and foreign to him, and his quest to find his loved ones. Thus the title Sylver Seeker. In fact, I appreciate this since I find a constant change of POV to be both confusing and distracting. With that said, I still believe that the characters and story will continue to improve with time because that's all they're really lacking. I love the novel so far, and greatly anticipate its continuation.

I started reading after loving the author's other book (The Bloodiest Mage. (LITRPG)) sadly discontinued.

Little did I know the author could one-up himself and write an Even Better Book. I'm not a critic and despite reading many hours I know I can't review well but I can give my honest thoughtsThe story in my opinion is amazing to read with twists always giving me a laugh, secrets sprinkled throughout to be discovered later, and an overall refreshing readI wish the author well and hope he can write more In the future for I'll stick with this book til the end

I normally never write reviews due to not being able to give good stories the justice they deserve, but I couldn't just leave this alone only seeing 7 reviews before me on a novel that should have 10x more.

The story is great, and the MC is one of the best i've ever encountered. The dialogues are thought provoking and not once did I read through one explaining the mc's thought process and was dissatisfied with what was written.

This book is worth every minute of your time, the characters are very well made and the plot is fantastic. The story flows well and previous events tie-in to current events even if they appear random at first. Plenty of Easter eggs hidden between the pages too if you know what your looking for. Give it a read you won't regret it.

One of the best stories I ever read.

The main character is smart, cunning, has decent morals while also being a nightmare in terms of what he is willing to do for his goals.

Also the best novel that shows an experienced fighter winning whith skill while also having a hard time and possibly losing (or just sitting around waiting for them to die after using a dirty trick *cough*poison*cough). The fights are the best. 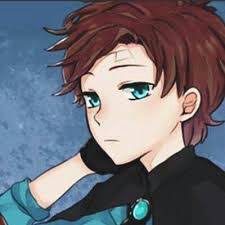 i really like the idea of this story and how the main character is made this is easily one of my favorite novels in this site.

the plot is interesting the MC is good the other characters aren't just some random guy put in there just so the plot advances and I rarely see any grammatical error.

Easily one of the best books on this site, by a pretty wide margin. I have no clue why this book isn't on the front page trending. Instead, this book gets out rated by poorly written neckbeard fantasies showcasing idiotic  beta male MCs acting like 12 year olds.  If you want a story where the protagonist is not an idiot, overpowered, spoon fed, misogynist, racist, close minded, short sited, or immature... Then you are in the right place. The fights are believable, the character is likeable and not a whiny kid, there is no harem, progression is not too easy or hindered by stupid decisions, and thankfully it is well written with few errors. My only suggestion would be to dilute some of the explanations/ inner monologue. It's not too bad though, especially compared to the wuxia style essays you come across in most books on this site.

Beyond Average Prequel [DiceRPG]
By thetaibot
Come join my Discord! https://discord.gg/d3JZYqY Check out my Patreon where you can affect the story! https://www.patreon.com/thetaibot “I suppose I’ve died then?” Adam had been a fairly average guy who had lived a fairly

Void Rifters
By NobleTalon
Waking up in an unknown place with thousands of other humans, the specimen B213-84 does not know how he ended up here, nor does he remember his previous life. After being abducted by a superior race called the Scyllas to fight for them as a battle

Path of Pandora – My Worldbuilding System
By Sacrishee
Hachiro Tanuki finds himself on a plain, floating in the void. Next to him is a mysterious obelisk, which upon closer inspection reveals a secret to the boy. [ Congratulations! ] [ You’ve unlocked: “System of the Developer” ]

Summoned as a Ghost in another world
By KrisVFX
Before this happened, Hiroki was a normal student in Japan who enjoyed gaming and reading manga. One day while he was playing on his computer, he fell asleep. When he woke up he found himself in a weird old room. Spider webs ever
Action Required