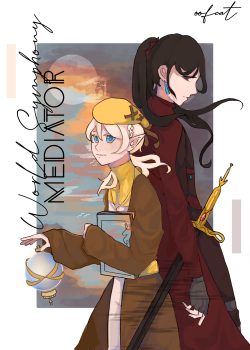 [World Symphony]
A popular VRMMO that gave its players high fantasy worlds and a classic RPG feel.
Ai was just one of the many players that played the game for the very first time. As a new player, Ai decides to follow what the [World Symphony] forum said and not pick the dreaded Mediator class, the class deemed as useless and complete garbage by the players.
It was supposed to be a good for nothing class that would offer no benefit at all.
Choose the Mage class!
Then why...

"Does this path interest you?"
"Yes."

A fantasy virtual reality game themed story in which a single player slowly unlocks the secret of a seemingly useless class that every player hates.

Content warning: Chapters titled "Reality" may contain scenes of depressive episodes and depression, mentions of self harm and intense grief over deceased loved ones.

cover art by me 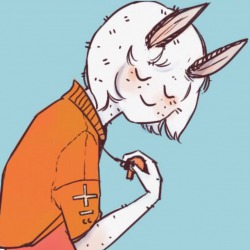 World Symphony Mediator is a cozy, slow-burn litRPG adventure with serious elements starring the compassionate and darling MC called Ai (real name "Ayn") and the charming but mysterious ML, Morion ("Mori"), along with a loyal shape-shifting familiar and an endearing cast of mythical side characters.

The stage is set in an imaginary and idyllic tone that shifts to action, suspense, and drama as Ai is thrown into situations that force him to use his mediator skills to his best judgment, not always leading to the happiest endings. Outside of VR, Ai suffers from unrelenting anxiety that can only be curbed by immersing himself in [World Symphony], but his anxieties still haunt him wherever he goes. The origins of his distress are hinted at in flashbacks and reality chapters between arcs, but they remain one of the greater mysteries still standing in the novel.

The author uses vivid descriptors of surroundings to enhance the worldbuilding and unique litRPG mechanics. There is a boundless sensation of exploration and discovery throughout the novel, and non-violence becomes a core theme as Ai learns to wield pacifism and "defeat" his enemies. Each arc stands out with new lands, quests, and species, and it can be hard to part with characters that Ai befriends once an arc ends.

Beneath the overarching fantasy genre is an undercurrent of romance between Ai and Morion that is slowly rising to the surface. They begin as strangers who meet by chance, but through little touches and kind gestures, their budding friendship grows into something... more? There is even some foreshadowing that Morion may have a connection to Ai in the real world... you'll just have to wait and see.

All in all, World Symphony Mediator deserves to be in your Scribble Hub reading list for its colorful worldbuilding and characters, adorably shy and relatable MC, and consistent updates (subject to change, of course, but I want to praise the author for their discipline). Plus, the author frequently adds their own illustrations at the end of chapters, which is a rare and special treat. Though the plot may meander and there are some spelling and grammatical errors, it always circles back to Ai progressing towards the ultimate goal of all [World Symphony] players: conquering [Heaven's Gardens].

Or perhaps Ayn's ultimate goal is to conquer his inner demons in the real world... 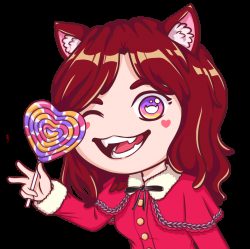 Upon reading this, I didn't have any expectation other than regular litrpg style of writing. However once I started reading, I realised that this novel isn't like any other litrpg I have read so far because it features a new class that doesn't exists in games called "The Mediator". This class is a non fighting class deemed to be useless because your stats won't help you win battle. Most people I've be friended online always wanted to be the strongest but with this book, it felt like it followed someone like me who isn't searching to become overpowered but to play the game.

The journey that the main character, Ai had to go through isn't easy because remember, he can't punch his way through to complete quest. He has to mediate instead. Doing this made it so that in each arc, you actually learning a moral value. Fighting isn't always the answer. Sometimes, it could be much simpler than that.

Sure, this book isn't perfect but most book aren't. I dare you to give me a book that I won't be able to question it's flaw. Anyway, when you read this, you have to keep an open mind. This isn't about chasing power, this is a journey to find meaning in things you do, even when you're doing it in a game.

Also, if you're here to read about love, well right now, there's mostly light action and just pure platonic fluff. It's not much but I find them cute enough to continue. Why? Because these two felt like they kinda meant for each other. Both of them felt like they are introverts that don't know how to make friends. They ended up subconsciously attracted to one another because both of them have similar vibe. They aren't too talkative but they like each other's company. Not all introverts need an extroverts to be with them. Sometimes another introverts can help bring out the sub-extrovert in them. They both are learning that as they continue their journey together.

That's all from me up to this point of reading. I hope my review had enticed you to read further!~ <3