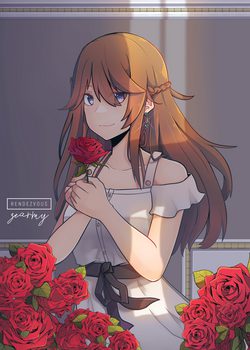 At the beginning of the 24th century, something shifted the dynamics of the galaxies. It brought hope to the crumbling Earth, but it also sparked a war that extinguished countless lives, all for the mystical phenomenon known as Magic.

Amidst the currents of history, Angelica Arteria and Alina Arteria entered the weakest national college of the country, the United College. There, they would find their friends, their enemies, and their love.

• You may join my Discord at https://discord.gg/SWj44TB
• In case you want advanced chapters of my series, please head to my Patreon, https://patreon.com/mihou.
• If you simply want to donate then feel free to do so at https://ko-fi.com/mihou.
• Cover art by zearmy, amazing guy.
× Synopsis by GDLiZy (60%), TypeAxiom (40%), Mihou (-1%)

This is a review from Chapter 6, might change in the future.

Okay... Let me get this straight first. The story is set on the modern world in the future (decades into our current year), it has magic as you expected from the title, and has an overpowered MC from what I can see.

The MC isn't that overpowered though, but more like stronger than usual MC, there are still people stronger than her from what we can see on Chapter Three, where a fight scene happens.

The story then progresses with the MC seemingly adopting a child she met on a restaurant who was attacked by a man who bumped her, and from what it looks, the child will have an impact towards her in the future (mostly the inheritance battle from chapter one).

The take on this story is interesting though, I am hoping it goes Mahouka route which is more theory focused.

Overall, this story seems interesting as of chapter six.

Heroes of the Past
By delta0G
My childhood friend, Michi Ichizen, is a troublemaker and constant seeker of adventure. Thanks to him, I got dragged into an idiotic escapade because he wanted to be a hero. But like everything he’s involved in, being a hero couldn’t just be peopl

Trouble at Helsing Academy
By Angelwolf
After Losing her parents, Michala Helsing goes to live with her Aunt Brenda, who is the headmistress of a strange school. Not only does she learn the mystery of the school that many people are suspicious of, but she must also deal with a secret th

Witches of Welland
By PurpleCatGirl
After an accident with an ancient book of magic, a witch becomes a priestess and her friend embodies a Goddess. Together with the friends they make along the way, they try to balance magic and normal life, while they work to bring some good to the

The Heroine Who Has Gone Off Track
By SerenityLake
Christian Yi was a stone-cold Special Ops officer in the military. Living his life with a gun almost always pointing at his back, he never let himself relax and managed to always safely come back. He believed that his luck would last forever, only
Action Required