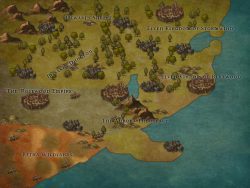 A boy wakes up in a mysterious black space, with a goddess who reincarnates him as a demonic dungeon. There’s just one catch in this world dungeons are girls, and then when he finally unlocks his avatar he discovers it is a cute loli demon and while he or rather she is dealing with her newfound gender issues the church comes calling.

This is my first attempt at a dungeon story, and my first story. Sorry about the early chapters, not meeting the same standards as my other fiction on this site, but I have not had time to revise them. Don’t worry it gets better later on. I write primarily to improve myself, so any feedback you have will be greatly appreciated.

Status: extra scene xiii
Apr 10, 2020
This novel is bad, offensively so.
The "story" is a complete mess without any real planning. Things just happen one after another and there are currently (after about 20 chapters) 3 or 4 vastly different "storylines" with random jumps between them. All of the characters lack any personalty and are complete idiotes. The most interesting one is the elven princess that gets cursed in like chapter 1 and trys to fight the influence the curse has on her mind but she quickly gives that up. Thats the most interesting characters in the story and thats just a gimmick.
The power scaling and worldbuilding are also a complete mess.
For the power scaling, even beginner adventure have stats in the 1000s and the MC needs about 3-6 months to go from a new dungeon (f-class) to having monster of b-class level roam his dungeon.
In regards to the worldbuilding. Everybody in this world is an idiot.
The biggest example is this: The MC is classed as a demon-lust dungeon this determins the monster he can use and more importantly the enviromental effect the dungeon has. The dungeon constantly releases pheromones that stimulate the s*xual desire of beings inside the dungeon and gets stronger the lower you go. This is know, lust dungeons exist outside of the MC and not a single adventure has equipment or spells to conter this. Even the adventureguildmaster (SS-class) falls prey to this. Like come on.
It also does not help that every god known so far is an absolute jerk and complety unfit for the power he/she has. The only one with an excuse is the godess of mischief as her pranks are what you would expect even if her existence herself does seem odd.
The only part left are the s*x scenes and well they are quite short and boring. Its the best executed part of the novel but lacks the description to even attempt to carry the story. Its somewhat above the fade to black.
On a personal note, I find it worrying how easy it seems to be to become someones slave/pet in this world.

To be honest, the overall story isn't great. Characters aren't developed much and sometimes even forgotten only to appear many chapters later only briefly mentioned. There is a huge power system that's never really explained to the reader. We only understand it from what other characters say about it.

However, this story delivers Yuri and lots of it. That's really all I ask for and all I need. We might get on futa on female later in the story it seems.

A suggestion. It's mentioned that "dark healing" a skill that appears very early on incorporates lust and combat. Including more Yuri in every aspect of the story will let you develop it without going without Yuri for more than one chapter. I need Yuri every chapter. I breath Yuri.

So I dropped this story at chapter XCVII, which my Roman numeral converter says is chapter 94, because of a few reasons.

The first, and biggest reason, is the characters. I don't really dislike the characters, mind you. It's just that the amount of characters is gigantic. Not just that, but quite a few have similar names too. Amy, Ari, Aki, Ally, Airi, Arlie, etcetera. I'm pretty sure there's also 2 characters named Lily? Well, you get the point. Now this does not make it a problem immediately. The problem starts when the author seemingly wants to make half of the characters in their story a main protagonist.

At first there was no problem. We had Misaki's POV, and maybe Reiko's for a chapter. Now, however, we've long passed the point of being able to count the amount of POVs on two hands. Every character that is even decently major has chapters from their POV. This wouldn't be such a big problem if it was just for some extra bonus chapter, or if it was closely related to the story of our main protagonist, but that's just not the case. I'm pretty sure there's like five or more different plotlines going on, all wildly different and not even near each other, some getting more attention than others. Every character that gets introduced can and will get like at least a part of a chapter from their POV.

It also doesn't help that there's basically no one-off characters. I can't recall any character, apart from maybe a handful, who have been introduced and not gotten more than one appearance. If someone gets a POV, I guarantee you they will get their own plotline.

But Misaki's not the only one. There's more than a few once major characters who I haven't seen for a long time. Like, when Reiko got introduced I was sure she was gonna be a major character for the rest of the story. She was introduced in the whole 'first companion in the new world' kinda way you often see in these stories. Now, though, I don't remember the last time she was even mentioned. Did the author forget she exists? Did they consider Reiko's story complete? Who knows.

I do enjoy many of the different plotlines, but I feel like they'd be better off seperated from WDYMADAG and getting their own full story.

I tried to keep reading, but I am finding myself continuing with reluctance. The story no longer feels exciting, because half the time I have to read back to remember what exacly was happening in the current plotline again. I also find myself visiting the character list every few chapters because I just can't remember who is who most of the time.

Those were my main problems with this story, and I'll leave it at this. There's some nitpicks I have, like the punctuation needing some work, but those nitpicks never prevent me from understanding the story or anything.

In conclusion, while I thoroughly enjoyed the first part of this story, it slowly but surely became tedious to read, having to constantly try and remember which of the plotlines this was again and what was happening. I'm sure there's people who can ignore the problems I had, but for me the story felt like the author was a bit too ambitious when it came to the characters. I didn't dislike the characters or their stories - I quite liked them, even - but there were just too many for my liking.

I hoped this mess of a review can be of help in your future works. Just know that I have nothing against your story. Just wasn't for me.

At first it started out good. I enjoyed it. Now we're here. If the other reviewer's well articulated review isn't enough for you, here is mine.

This story is (was) about Misaki. Reincarnated as a dungeon core and as a girl. Easy enough?This is all basically irrelevant now. Misaki hasn't even appeared in close to 60-80 chapters. This novel has horrifically gone off the rails. Scratch the LitRPG tag, there hasn't been a real level up sense chapter 40 or so. Honestly, I'd be more accurate but I don't know my roman numerals.

At first everything was fine. However, looking back I think everything went awry with one particular character: Ariele. Ever sense she has been introduced, more and more POVs have been introduced. There is a 10+ chapter stretch of her in an alternate dimension hunting monsters and talking with characters that have nothing to do with Misaki nor her plot. I've been waiting for MC to return as the POV, but I'm done. As of this chapter: we have the POV of a character I do not remember meeting with, guess who, Ariele, on a goddess nudest island. What does this have to do with Misaki or anything else? Nothing, nothing at all.

It seems like the author wants to write any other novel but this one and refuses to simply make another one. People who complain Blue in Blue Core becomes "simply a background element" are liars and have not experienced this. Misaki isn't even a character anymore. Don't read this unless you've really got a lot of time to waste and have nothing else to read.

I'm gonna drop this at 104 chapters (if I got the numerals correct, its CIV). That is due to 1 simple problem: There’s way too much going on. Everytime I read a chapter it's like picking up a book in the middle of the story. There’s nothing wrong with the actual writing, it's just impossible to keep the, god knows how many, stories straight.

It's a shame because I quite liked the story when it started out. The other reviewers were right that when Arlie (?) or whoever was introduced the story went off the rails.

Rating 2/5 purely because the beginning was good and the grammar has stayed good.

The New Chimera (Archive)
By Fighterman481
!!!THIS SERIES HAS BEEN REWRITTEN, AND THIS REMAINS UP ONLY FOR ARCHIVE PURPOSES!!! New series here: https://www.scribblehub.com/series/269454/the-new-chimera/ Lucas was your average college student until he stumbled into possession o