When the Great Creator went missing, the Chaos descended upon the Three Realms. War and conflict erupted in every nine major realms, and no one able to stop the high waves of change. Empire, kingdom, country, even cities, many were gone within the river of history; while new powers rose and claimed sovereignty of lands and realms. Five thousand years later, a child was born on a noble family of a small kingdom, with his birth he brings a locked secret of the entire Three Realms. And this is his story.

P.S:
- the writer kind of lazy one, so there is likely hiatus after a hiatus.
- English is a non-native language for the writer, suggestion and correction are welcome.
- there is a possibility that a new chapter is posted at arunametta first before published here. 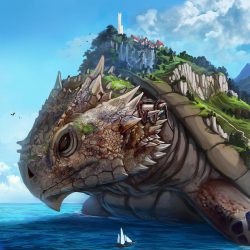