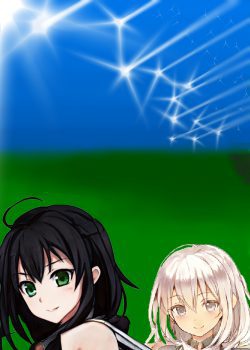 Amara stood upon the fields, watching the dust rise as the demons made their advance in the distance. Behind her stood the mortals, whom she for the last millenium was told were nothing but fodder. Just like herself.
A smile grew on her face as the wind cooled her lips, wetted by the only one who thought otherwise.
And Amara was going to prove to one and all that her support had not been a wasted effort.
She raised her arm, giving the command she had waited a thousand years to give.
The blue sky began glittering, and like falling stars, her hidden ace made their arrival known.
___________________

A woman from Earth, becomes a sacrifical pawn when she is chosen as champion in a war between the gods that rule creation.
Follow her, as she prepares for war - a daunting task which is an uphill battle on it's own, where none expect her to emerge victorious. Except one.
___________________
Mixed dark and lighthearted story.

Draft. Please let me know, what you think the story might be lacking. All feedback is appreciated!

First few chapters, up to chapter 03, have a fast pace. Thereafter, it's a slow read.
- Non-harem in terms of romance.
- MC is technically OP, but starts off weak when compared to those in her league.
- A lot of side stories to display the supporting characters' thoughts and motivations.

What is there to say about this story... It's a slow burn, fun to think about yuri story. Ultimately, I feel it's just the kinda story you have to read and judge for yourself, sense it's not the typical isekai.

I Just Wanted To Die But Instead I Became Immortal
By Nyanako
Bridget Bridges has lead a meaningless life. She was nothing but a burden on those around her, so she decided to end it all. Throwing herself into the river, she wakes up on a distant shore. Now, it seems no matter how many times she gets herself

What Do You Mean All Dungeons Are Girls!!!?
By JCountry
A boy wakes up in a mysterious black space, with a goddess who reincarnates him as a demonic dungeon. There’s just one catch in this world dungeons are girls, and then when he finally unlocks his avatar he discovers it is a cute loli demon and whi
Action Required