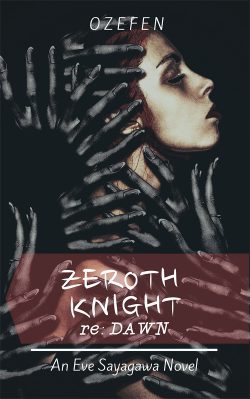 Evangeline Sayagawa makes the ultimate choice at the cost of the ultimate sacrifice: She decides to leave her world that she fought so hard to return to, and return to Arsea in hopes of saving everyone. Little was she aware of just how bad things had gotten. The world she was returning to was cast into chaos and on the precipice of being destroyed. She awakens in this new kind of Arsea, after having witness the end of a dear friend. The world now belonged to the monstrosities of old, the Beta, and their corrupted human warriors, the Eld.

With her fake identity, that which defined her in this world, being stripped from her, she now has to navigate a darkness in which not even the women she loves recognize her.

This is book 2 of the Evangeline Sayagawa "Zeroth Knight" story, with book 1 being found here: https://www.scribblehub.com/series/54937/zeroth-knight/

The first "chapter" posted here is a hyper-condensed version of volume/book 1, in case anyone needs a generalized refresher of events, or for those who wish to start with this book instead as it is faster paced and more action-packed than the first one. Suffice to say, but most of the details from book 1 are lost by doing this; however, enough of the more-important information is present to allow one to understand the general idea of what is going on.

This book features a mostly lesbian cast and deals more so with fate and crises of identity more than anything else. However, there is much more action in this one than any of my other stories thus far and brings about the end of Evangeline Sayagawa's story arch... sort of.

I have another story up, a short story drama with light yuri and supernatural themes: "Escape The KNIGHT" here: https://www.scribblehub.com/series/55437/escape-the-knight/

Follow me on Twitter @Ozefen0 to stay up to date on my stories and what have you.

Share the story if you think it's good. And please rate some stars and leave reviews guys. It will help encourage other people to take a chance with the story and get to know this wonderful journey with us. Also, a friend has made a Discord for the "Zeroth Universe" if anyone wants to join and hang out to talk about the stories, theories, or just general fun chats with us!

This is book 2 of Zeroth Knight. If you haven't read book 1 yet, I highly recommend reading that first so you can get the necessary context and events before this book... Or read the synopsis chapter.

I think the major point of this story is Eve the MC and her relationship with her wives. Eve slowly repairs her broken relationships with them one at a time, and the author does a great job writing the s*xual tension as it happens. Very fluffy.

Compared to book 1, this book has way more action with Eve tossed in the middle of a full blown war for survival. Eve participates in multiple major battles along with the wives, and as a non-OP protagonist, it's interesting to see the ways she wins those battles. Along with the wives of course.

In this book, Eve finally gets her sh*t together! And stops pushing others away before it starts getting good! This means she is actively pursuing her wives, which leads to more gay fluff.

If those major points weren't enough to convince you to check this book out, then here is a Major Spoiler, that I know as a beta reader of this book, that may convince you...

System Evolution of Soul
By Drack21
Reborn as Alexander Ilios Apeiro in another world “Gaia” by an unknown entity will have to embark on an adventure to develop in this new world and have a place to belong. He will have as support a system that will allow to trave

The Ulfhedinn of Dueling School
By HokuouTenrou
In the future, where magitek is a part of daily life and dueling is a popular sport, one boy from a remote village in Iceland entered the most prestigious Duel Academy, hoping to see the world and be the best, strongest duelist ever. En gard