Boy meets girl! In a world progressing towards destruction, Takumi Hachi simply wants to become the best Basketball player of his era. However, being the Rikuto next in line to become the head of the Hachi means he can’t avoid dealing with Shikis, Strays, terrorists and other monstrosities terrorizing his homeland. He’ll have to find a balance between his role as the enigma “Alessandro“ by night and pursuing his basketball desire by day. Not to mention a planned marriage to a troubled girl with rare, highly sought-after blood. No one ever said it would be easy, but nothing ever is in the ordinary life of a Setsu vampire.

The sudden arrival of an unexpected fiancé has disrupted Takumi’s plans to ace Hirazawa’s Spring Basketball Ceremony. Coupled with that, an old friend has called him up for a peculiar favor: Investigate “The Night Stalk” in Odai-wai prefecture. His school year hasn’t even officially begun and he already finds himself back in the supernatural world he so detests … much deeper into it than he would’ve expected. 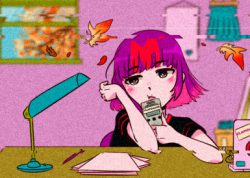