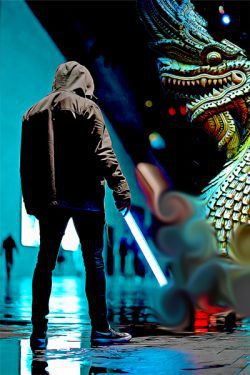 Jason Park, a man with ambition. At a ripe age of twenty-nine, he took the risk to struck big at the cut-throat world of finance at Wall Street. Like any human in the whole world, money is everything. Yet for him, things didn't happen as he expected. Burn out and failing another one of his job interviews, he dragged his feet over the sidewalk of New York City. Yet something unexpected happened, a cry for help coming from the dark alley of the city. A city well-known for its two sides of light and dark. He hesitated at first but his morality swayed him. He came to help but what he found only opened a door that he wishes it wouldn't open.

He was the first and it wouldn't be the last.

His reliance shifting to the latter.

An encounter that will bring forth a New World order.

A world hungry for blood, sweat, and tears.

Disclaimer: This is a work of fiction. Names, characters, businesses, places, events, and incidents are either the products of the author’s imagination or used in a fictitious manner. Any resemblance to actual persons, living or dead, or actual events is purely coincidental.

I freaking love this novel!

I have to disagree with the comments in the chapters and reviews about Jason being stupid. This is one of the charms of this novel, about a NORMAL person making mistakes. So far the author has skirted the thin line between making the MC a typical, ruthless expert we see in many KR novels, and incompetent idiot. Yes, Jason makes mistakes, a lot of them, because he's ordinary. He's caught up in a situation beyond comprehension, and he makes fewer mistakes because of his fondness for computer games (moral of the story: kids, play more computer games. :D). But he seldom makes the same mistake TWICE, and that's what we find so realistic.

Yes, he screws up, he's human. But he tries to learn about this new world, prepares and grinds his skills when he has a chance, and tries to make good decisions in battle. He feels guilty, he anguishes over his past mistakes, he moves forward on his own. He's not two dimensional like most KR survival genre MC's, he prioritizes his family and himself, but he knows when to retreat, and when to attack.

Jason is suffering from PTSD, Survivors Guilt, and he's ashamed he wasn't strong enough to save those important to him. Family, Ex. I interpret his massacre of the jewel thieves due to his frustration at not being strong enough to take out the monsters with his current strength, so he kills humans, who are mass murderers, that deserve it. He denies he's a savior, because he deeply wants to be one, and he's ashamed of his cowardice. The author shows this, doesn't tells this. He doesn't tell his parents he's Awakened, because he's afraid they'll blame him for all the people he failed to save, because he blames himself. Again, show, not tell.

I really can't recommend this novel enough. Go read nau, if you're interested in a deeply flawed, deeply HUMAN MC, who wants to do the right thing, is afraid of losing the only things he still cares about (family) and he's trying hard to be brave, to be the hero he thinks he should be, but is terrified of becoming. GO READ NAU!!!!!!!!!!!!!!!!!!!!!!

MC is imperfect and author does a good job of showing his initial inexperience and struggle to live. One of my favorite current reads and look forward to how it develops

The MC seems normal and reacts like most people would and the writing is pretty good. The premise is great and though not unique, it is still a fun setting. I see a harem building though, please don't romance the cousins, it is just weird.

I can see now that the MC is making more stupid decisions and is saving his points like a madman, I'm hoping there is an explanation for this later like his stamina affecting him, but if not then the MC is getting less likeable by the chapter.

I really love your novel "the man who killed the first monster" but you really have to improve on the personality of the MC am not asking you to make him evil or ruthless, am simply asking you to make him a realist wasting a whole 30mins waiting for your ex girlfriend to change her clothes while your cousin is in a critical condition (heavy bleeding both internal and external) and healing your ex girlfriend while the same monster that attacked her is busy attacking over 20 other people including your cousins aunts and uncles I don't know what to say about that. The MC is not a block I just don't do what to call him he know you get titles by being the first to achieve things in the world but he chooses not to explore with his points he boards them even when he has 2X the normal amount just imagine him have 80+ points but his stamina, dexterity and energy is still in single digits. Am ready to rate you give stars if you killed off Maria permanently no coming back as an undead, zombie, vampire, summons or whatever and also fix his personality

I like it its a good story but the MC is meh... why dont he use his point its basic knowledge for gamer’s and he says he is one I don’t understand because a lot of bad stuff would be easy to solve if he use is point but he dont do it why??

Chronicles of Aonus [First Draft]
By Roxyreads
Amber is 27 and having a streak of weird luck; her universe was destroyed due to administrative error and now she’s been dropped into a new RPG like world to live out her life. This wouldn’t be such a problem if they’d ac