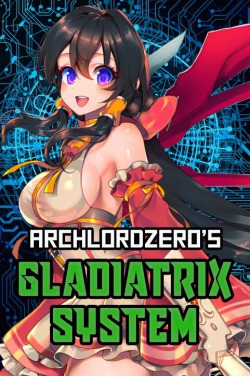 Battle Fiestas are created to bring entertainment to the new cyber mystic community, together with the development of the supersoldiers known as "Gladiators" and their system administrators that are called "Kaisers". The Gladiator/Gladiatrix System provides a way to control the supersoldiers' unlimited potential on the battlefield.

Elzane is just an introverted teenager who only has one dream: to participate in Battle Fiestas as a Kaiser. But before he can do that, he has two problems: first, he does not have a Gladiator partner; and second, he is forced to marry Raynevere, a popular girl and the heir of a multi-million-dollar company. With his whole life planned ahead of him, he is ready to give up on his dream. 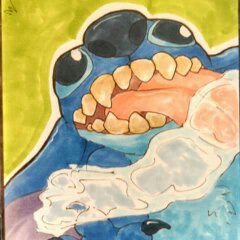 4 out 5 for a solid story idea, original mash up of some battle-partner themed animes, and for seeming to be well planned out. It's not a 5 star simply since I could get attached to the character that well and I feel the chapters are to short for the amount of plot there is. Anyone looking for a quick, simple read, with good progression of plot, some action, with nice fluffy moments, check this story out and enjoy.

Moving on, to express my own feelings. I liked the story, or at least the idea. When I read the first chapter, I had a flash back to an old anime/manga that I really loved and enjoyed. Angelic Layer! An old story but this story captured elements I loved from Angelic Layer. Mainly a partner duo fighting together to become champions. A theme similar to Pokémon even.

But then I was confused. We get the idea of Kaisers and their nano-enchanted/magical partners Gladiators or Gladiatrixs, terms used to describe a male or female partner respectively. Then big bad guys, the hidden threat, Cyberdemons. We get some idea of who our MC is, and his troubles finding a "Gladia" partner. However we break from all that to the MC's engagement... in the 2nd or 3rd chapter no less.

Then for about 10 chapters it's an awkward set up of the MC and his new fiance adjusting to their sudden update/advancement in relationship. Sure, we get the idea that the MC is shy, and surprised with this change, the fiance seems almost too eager with the whole arrangement, which just felt awkward for me, leaving to question the thought processes of all parties.

And honestly, if I had combined that with the chapter lengths, that look like they are about 2 thousand, which should be enough (I guess, I personally personally something north of 5 thousand words), the chapter feel about 1 thousand words. With how fast the writing is, and a speedy understanding of the characters, which left me unattached to the bigger plot of our mains, I would have rated this story lower. Like 3 or 2 star range, since it was a slight chore to keep my attention to the story to read as far as I did.

With an over all plot that you find often in 90's anime, which to clarify, I love the plots of those oldies, but are very very predictable in progession, this story doesn't hold my attention like an anime. This story would do much better as an anime or an online comic, then as a web novel, an anime or comic I would be willing to throw money at! Like I said before, the story idea is delightful and combined with my favorite story type of "partnership fighters", if story is a rough gem to me.

Which leaves me leaving a 4 out 5 stars, and a warning to feature readers. This may be a bit of a challenging read, the story might make it hard for you get attached to the characters, but the author is bright and inventive with the story. And if there is ever a web comic or fan made anime, I hope I get notification about it so I see this gem in it's "true" formate.

Multiverse of Marvel
By akaxkaxyap
————– “Let’s leave my origins. We both have unspeakable origins. But the problem is I know of your origins. Galan of Taa.” John said. Galactus’ eyes squinted as John said his real name ou

THE PUNISHMENT OF THE GODS OF OLYMPUS
By LORDKARMA
the gods abandoned their role of guide and protector and of humans, now they have used their powers to satisfy all their desires regardless of the suffering they cause, but when the creator awakens from his sleep and sees the chaos that ‘the

Reincarnated in an Otome game as the ugly character in the background
By Siegburn
Razel, is a reincarnated youth. In his previous life he was a lonely boy who spent his days playing video games. Then one day tragedy came into his life. It all ended for him, was what he thought, until he opened his eyes; to find a fantas

The Fateful Uchiha
By MilexKor
Jun cursed his luck from being reincarnated into the Uchiha clan. He would rather remain dead recalling the fate of the clan. But he was given a new life, and he refused to let it end prematurely. How can he prevent crucial events from happening?
Action Required